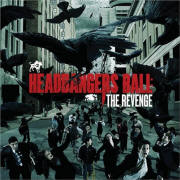 Let’s reminisce for a minute or two and head back to Saturday April 18, 1987. This is the date that the first ever Headbanger’s Ball premiered on MTV. Due to a lack of metal videos being aired amongst the common top 40, Headbanger’s Ball filled the void. The show was originally hosted by Kevin Seal, but soon after, that duty was taken on by Riki Rachtman, who was the most identifiable host for the show. Headbanger’s Ball was the source for mainstream metal, as well as those who got their fix from random and obscure lesser known bands. But for no apparent reason whatsoever, in 1996 MTV cut this 3 hour of mayhem show from the air. Fans were outraged and appalled, there was no concluding episode, it was just gone.

Fast forward your mindset back to today. In 2003 MTV 2 resurrected the series with new host Jamey Jasta (Hatebreed vocalist). The show still has its mainstream mixed with obscure bands theme that it formally took on. Although a lot of fans of the original won’t accept the new form it’s taken on for reasons such as thinking it is too “manufactured” now. Although these are the kinds of people that can’t get out of their damn shells and won’t open up to new sounds. The show is as rocking as it has ever been. One of the major differences this time around… CD compilations of artists featured on Headbanger’s Ball.

The newest and second compilation is Headbanger’s Ball: The Revenge. The CD has a mix of everything you would want from two discs of new metal. Spanning only the short period of 2004 to what 2006 has brought thus far. The songs are the metal chart toppers of the past 2 years, mainstream and underground lesser known acts, just like the show itself offers. The bands include those I know already and listen to on a daily basis such as In Flames and It Dies Today, but still offers good music I have not heard such as Thursday. One thing that is very sick about the CD are the previously unreleased songs. These three songs are Hatebreed’s “To the Threshold,” Kingdom of Sorrow’s, “Buried in Black,” and Walls of Jericho’s “A Trigger Full of Promises.” I didn’t much care for Walls of Jericho, but it made sense to have two bands Jamey Jasta sings for on the release… it gives the CD an added bonus seeing as he is the show’s host. Both songs were two of my favorites on the compilation.

Standout songs on the chaotic dual disc… well there were so many to choose, but I’ll skim over my personal favorites. In Flames’ “Take this Life,” is there really any question as to why this is my first choice? In Flames have taken the world by storm and paved the way for over half of the bands on the compilation itself. The song is the first track from their 2006 release Come Clarity, and right from the get go it will have you banging your head and singing along to the chorus. Next up is Hatebreed’s “To the Threshold.” This song was one of the previously mentioned unreleased singles on the CD. This song keeps to Hatebreed’s roots and defines the term “Hardcore”. If anybody tells me that they listen to hardcore, chances are in this day they are wrong. Hardcore is getting a bad reputation lately, with bands being thrown into the genre that are not one bit in the category. So cheers to Hatebreed for their newest track which keeps hardcore alive, and I’m looking forward to the new CD. I was also psyched when Lamb of God’s “Now you’ve got something to Die for (live)” started blasting.

The band I haven’t heard too much of was A Life Once Lost with their song “Vulture.” Before this I heard a bit of their stuff, it was impressive. Then this song reeled me in like a hungry trout caught on a hook. Incredibly catchy, and keeps up in the center balance of Headbanger’s Ball’s theme of mainstream/obscure. If you haven’t heard of It Dies Today and are either a mainstream kid or an underground metal fan, you’ve been under a rock. “Severed Ties Yield Severed Heads” is the chosen song. It Dies Today’s sound is a sick mix of death metal with very melodic choruses and the occasional breakdowns thrown in to the mix.

There was a lot on this CD I didn’t like, but with two discs worth of what is hot right now you can’t get picky. This compilation offers a lot to whatever your style of music is in metal. Whether it’s metalcore, hardcore, mainstream, or death metal, you will like at least a few songs. And chances are you will also be impressed with others. I recommend Headbanger’s Ball : The Revenge for picking up, and give it a 7.5/10 for offering a good mix of everything chart topping, and the best bands that are shadowed in obscurity.  [ END ]