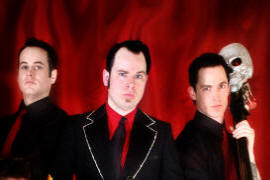 Interview with The Matadors frontman Hooch

Rocking in the name of Satan is what the Matadors are all about. Don’t be fooled by the name though, the only kind of bull being fought off by these matadors is bullshit music that does not rock hard enough. Their album Horrobilly 9000 dropped on Tuesday, May 9th on Stereo Dynamite records and has been a long time in the making for these London, Ontario locals. This incredible album is now available across Canada and for ordering online. Uncompromising “horrorbilly” playing style with chilling lyrics are what feed the band’s sound. The tour for promoting the album has just kicked off, and I got a chance in between shows to get a hold of Hooch (guitars & vocals) for a few words. Here is what he had to say….

How would you describe your sound? To me it’s a mix of Misfits style rockabilly horror but with Johnny Cash like swing, which turns out to be incredibly catchy.
Hooch: Here’s the recipe: a little Screamin’ Jay Hawkins, a generous helping of Misfits, a dash of Billy Lee Riley, a hint of Venom, sprinkle the whole concoction with the combined ashes of Carl Perkins, Gene Vincent, and Howlin’ Wolf…. That’s The Matadors, to be served to your guests on fire and with copious amounts of bourbon….

So I got my copy of Horrorbilly 9000 and I find myself singing a lot of it at random times. How long did this album take to record?
Hooch: Roughly a week and a half… it’s hard to say really. We actually recorded 24 songs but the batch on Horrorbilly 9000 were the most cohesive with one another. We operate fast, everything is live including solos… oh sure, it may sound over-dubbed, but the truth of the matter is: I am playing two, sometimes 3 guitars at once….

Were you all happy with the outcome of the album?
Hooch: We’re totally happy with it. I can’t imagine a better album. You put this record up against any album… this one’s better. This may be… NO! This IS the greatest album of all time. For awhile there, I considered not releasing it to the public fearing that it was simply TOO great for mankind to hear at this delicate stage in human history, but finally greed and the need to buy more gear and dope prevailed and here it is…. Lucifer have mercy upon my soul….

What types of influences keep you driven after ten years?
Hooch: Boobs, whiskey, ass, the devil, more ass, more booze, speed, titties, fire, ass, that about sums it up really.

Promoting the music and the new album is the spring tour starting May 5th. What do you usually do to prepare your selves for a tour?
Hooch: There’s a rigorous training schedule we like to stick to that includes about 3 months of straight boozin’ and sluttin’ but it’s not limited to that. One man’s strip bar is another man’s gym. We’ve lost a few members due to this. Me and Jeff like to stay ‘fit’, I think that’s what keeps us on top of our game in this business. We are totally untouchable. No one, I mean NO one, puts on a live show like The Matadors. I challenge ANYONE to keep up with us.

What was your favorite show to play and why?
Hooch: We played with Link Wray in London Ontario once, that was damn cool… also we played with Hasil Adkins in Cleveland Ohio once… one of those would be it for sure… or maybe that time we opened for The Damned… really, there have been so many great times for this band it’s too hard to pin one down. We’ve been lucky enough to meet most of our heroes through playing in this band.

Describe a typical show for the Matadors.
Hooch: Our show is a loud, dirty, fast, and sweaty freight train. We don’t stop, we keep it going until you think you can’t shake your ass anymore and then we KEEP it going until you think your ass will fall off AND when it does… we send a team of ass surgeons into the audience to sew it back so that you can continue shaking that ass. Our show is like being in a fun house that’s been set on fire. For some reason (and this is a well documented fact) we set bar revenue records wherever we play. People just plain get crazy loose. Stats Canada released some figures that show that our Canadian tour last year upped the teenage pregnancy rate 67%… I think we can do better this year.

Was there anything in particular that attracted you to the new Stereo Dynamite record label you recently signed with?
Hooch: Money. The fact is, they’d been chasing us down for YEARS begging us and begging us… so finally they came to us and said, “listen, we’re going to create this label solely so that you can release your opus… you can finally put out Horrorbilly 9000 and do it your way AND we’ll pay you an outlandish amount of cold hard untraceable cash….” How could I say no?

The news section on your website has one of the funniest things I’ve ever read. The telemarketer calling and leaving her number, with your onslaught of calls afterwards. Then to top it off leaving her number on the site, what kind of response did you get from the fans for that?
Hooch: You should call her. Seriously, they pleaded with me to take that number down after the first coupla thousand calls. Finally they threatened legal action… dummies. Their number remains on my website and some die-hard Matadors fans still call there like 5 or 10 times a day. Lucifer be praised!

After this spring tour, any future plans that you’d like to follow through on?
Hooch: We will continue to harvest souls for Lucifer as is our duty on this planet as his representatives. Other than that we’re working on having the letter C stricken from the English language. It’s been a struggle but I think we’ve made a good case so far. I guess we’re going to Japan in the fall… that’s pretty god damned cool isn’t it? I’ve lost it. I can write no more….  [ END ]