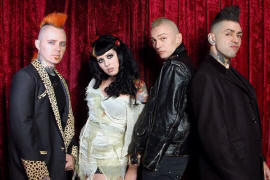 They say that the 3rd time is a charm. I’m not sure if it is, but my third interview was with the drummer from the Horrorpops! That’s right! The drummer of this world famous band and myself stepped outside The Opera House in Toronto, Canada before his set the night of Wednesday April 19th, 2006 and conducted one of my favourite interviews yet!

When did you join the band? Were you one of the founding members of the band, or did you join later on?
Henrik: Well… Kim and Patricia, they met in, oh god, 1800 and something [laughs]. And they tried out a drummer and shit, a friend of ours’. It didn’t work and then I joined in, so you can say I’m one of the founding members. They wrote some songs… like they had written 4 or 5 songs when I joined.

So, then how did you meet the other members?
Henrik: Well I’ve known Patricia for 15 years now or something, so we’ve been friends since we, well, [gestures with hand] weren’t as big as we are now.

Ok, whose idea was the go-go dancers?
Henrik: That idea actually came up because Patricia worked at a piercing and tattoo shop, and Kamilla worked there also, and our first dancer, who left a year or a year and a half ago, Amelia. When we rehearsed on Thursdays or Fridays or Saturdays, they would all just come down to our rehearsal room and sit there and drink beer with us. I think we played 3 or 4 shows when it was only me Kim and Trish, when we were still a trio. It was just like, we need something up here man, we need to have something so that people have something to look at instead of just looking at us. We weren’t that good at playing at that point you know? So, we needed something to take away the attention from us playing.

Other then the obvious (Go-Go Dancers, Stand-Up Bassist), do you feel that anything else sets you apart from other bands?
Henrik: I do think we have quite a different sound then anybody out there, right now. We have some pretty weird guitar player called Nekroman, who’s actually a bassist and he makes some weird noises sometimes. And Patricia’s voice is, I think is very unique. People always compare her to Gwen Stefani, and I get like, how can you hear that, you know? I would understand if they said Siouxsie Sioux or Kate Pierson from the B-52s, ’cause they’re similar kind of singers. Actually sometimes, she really sounds like Kate Pierson, I think. But, that’s a plus in my book.

When you first joined the band, did you feel you would have as much success as you have now? Or did you feel you would have less or more?
Henrik: When I first joined, I was still in another band back in Denmark. And we split up shortly after we started jamming. The first, I don’t know how long it was. We weren’t at the level we are now. So, we played a few shows here and a few shows there and back to what else we were doing. And then in the late ’90s, I think it was, we started you know, getting’ some more attention and it got more serious. And later on, of course, we got the deal with Epitaph/Hellcat Records. Then, it really took off and we moved over here. Not in Canada, to Los Angeles where Hellcat is based out of.

Ok, the kit you’re playing tonight, what does it consist of?
Henrik: It’s an old Premiere kit. That I was given in the former band, that I shipped over here. It’s a Premiere kit, Insignia. I got a 24×18 kick drum, and a 12×8 rack tom. And two floor toms, 14 and 16. And something that says Peuw-Peuw and another thing that says Cht-Cht. [laughs] I use Zildjian cymbals.

You sing and do drums, correct?
Henrik: Yeah, yeah.

Well, where did you learn to do both, did you just constantly practice it?
Henrik: I’m not a great singer but I can simulate Patricia’s voice pretty good, so I do a lot of dubbing, you know? Just follow her just to give it some more Umph! I do a lot of harmony voices and I do a lot of AHHH! very high pitched voices. The band I was in before was very vocal based, you know? Melodic punk rock and the singer there is an old boarding school friend of mine. And we rehearsed, and we rehearsed and we rehearsed when we were younger too. And I’ve always been singing and playing drums. For me it’s a part of playing music you know? Singing, it’s the basics, your voice and the boom-boom and the drums. It can’t get any better huh?

The tour so far, do you feel you’ve had good turnouts for most of the shows?
Henrik: Yeah! Actually, its been more or less sold out all the way. Except for two shows which was in Banff, which is never sold out when you’re there off season. And…uh…I can’t remember the other one. But otherwise, it’s been sold out all the way, here in Canada. We played, I think there was like 600, when we played Vancouver. We played Seattle the day before, there was 700, so that’s the kind of crowd we usually play for.

Well due to the success of this tour and your most recent album, do you feel another album will be in the works soon?
Henrik: We are gonna start working on an album late this year. I know Nekroman is gonna do an album also but I think we’ll figure it out. I think that we’ll start writing songs again later this year. And hopefully record it so we can have a release in spring, next year. But there’s nothing quite planned yet so let’s see how it goes. But that’s the aim right now, a spring release next year.

What else do you think the future holds for The Horrorpops?
Henrik: WORLD DOMINATION! [laughs] Free boobs and slutty women all over the world! [laughs] No, um, what the future holds? I don’t know, like I said were gonna record a new album and were gonna do some more touring. Hopefully we’ll go to Australia again and Japan. I know we’re gonna do some festivals in Europe here in August. So, that’s the near future, and then the album, after that, I guess more touring. I guess that’s where we, how do you say it in English? Thrive! I guess that’s a pompous word but that’s where we live so that shitty fuckin’ old bus there. [points to tour bus] That’s my home!  [ END ]