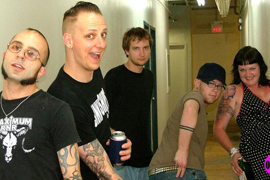 She sings like Bif Naked. He calls himself Cactus… I don’t know why. Together with their fellow band members, they are Sinkin’ Ships, and they are everything a punk band should be – loud, fast, and occasionally destructive. Rumour has it that Naomi tends to break shit on stage… but that could just be a rumour. In any case, these guys are kickin’ it old school – playing as many shows as they can get, and putting out records as fast as they can make them. They’re doing things the way they’re meant to be done, and they’re showing no signs of stopping anytime soon. I caught up with them at the Vatikan in Toronto on April 14th, 2006… here’s how it went down.

Sinkin’ Ships formed in 2002 in Toronto. Tell me a bit about how you guys met, and how the band first started out.
Naomi: We’ve all been friends and played in different bands around Toronto for about 10-15 years, and at a certain point when my old band 2-Pump Louie broke up and Mark’s old band, Blastcaps, ended at a certain point – well, Cactus’ and my band, 2-Pump Louie…

Naomi: Sorry, Cactus. Anyways, we decided to start a band together and we started playing acoustically for a while, and we always really wanted to be an electric band so we got drums and bass and we got that together. We’ve gone through a couple of changes, but we’ve stuck it out and done what we wanted to do, so…

Cactus: We have a bit of a history. Me and Mark met each other in grade 9 back in high school. We were playing guitar way back then together. We played in a couple bands together, and like she said, then we played in 2-Pump Louie together and we broke up, so we decided to start a new band. And that’s about it.

Alright, how would you describe your sound to anyone who hasn’t heard you guys before?
Cactus: We’re a bunch of punk rockers playing rock ‘n’ roll. That’s basically it in a nutshell… a little bit of country.

Naomi: And a little bit of hardcore.

It’s kind of like a crock-pot really.
Naomi: Yeah.

Okay. So you guys released your first EP, entitled No Time, in March 2004, and just a few months later – what was it, July? – you released your first CD, which was Mayday. That has all the songs off No Time, plus some additional tracks. Why were these two albums released so close together?
Naomi: Well the EP we put together because… that’s the four-track recordings?

Cactus: No it’s not. The CD we knew wasn’t going to be out til July, and we had a string of cool shows coming up, like an opening spot for NoMeansNo and some other really important gigs, so we decided to put together an EP… a limited edition one, with four songs off the upcoming CD. They were limited to 100 and we put a bonus track on it, and it was just to put some stuff out there in the few months before the album was going to come out.

Naomi: There are a couple of acoustic songs…

Naomi: Or, there’s one acoustic song that’s available on that EP that isn’t available anywhere else, so at least we did that. There’s one song. [laughing]

That’s kinda cool. Then September of that year, you guys went out on your first tour. Describe that experience. Did you guys have any favourite cities or venues that you played in?
Cactus: Yeah. The Seahorse in Halifax. We love it. We have lots of friends there.

Naomi: We played with a band called the New Breeds… they were really cool. We met Sarah from the Trailer Park Boys, so that was exciting for us.

That’s awesome!
Naomi: Yeah. She has our shirt and our CD and stuff like that, and we talked to her. I actually liked Moncton. The shows were small there, but we had a really good time, and we liked the people that work in the bar, so… [laughing]

Naomi: So we like going to Moncton, and the hotel we stay at is kind of fun too, so…

Cactus: Did she say hotel? We mean the dirty floor in the back of the alley of the punk show.

2005 must’ve been madness. In January, Mayday was voted runner-up in the list of Top 10 Great Fucking Canadian CDs, then you guys reformed and played North By Northeast in April, then to top it off, you released another album called All Signs are Wrong in August. That was like, three albums in just over a year, right?
Cactus: Yeah.

So where did you guys find your insp… Ugh, my God I can’t talk.
Naomi: It’s okay. [laughing]

No time to think about it? [laughing]
Cactus: Hectic lifestyles, shit going wrong all the time… you choose your path and if you want to be in a band and you want to write music, then you do it and when inspiration strikes you, go with it. Right now, we’re writing again. We’ve got, like, four or five new songs already, and by the end of the year we’ll have another new album out again hopefully.

Naomi: It’s all about what keeps coming out of us. We keep writing songs and stuff, so we just have to get them out as fast as we can. [laughing]

Cool. So, last September, you signed with Wounded Paw. How did you guys come together with that label; how did that sort of happen?
Naomi: Well, Preston – who has been a friend of ours and who has played in bands around us for a long time as well… he’s been part of the punk scene in Toronto for forever… we had actually recorded and paid for recording and had done our artwork and everything on our own, but at one point we needed help to get it out and to manufacture it. We didn’t really want to give it into anybody’s hands that we didn’t know, but because Preston was a friend, we trusted his… his…

Naomi: …judgement and the way that he worked and decided to become involved with him that way and to see if we could all make it a little bit better together. So they’ve helped out a lot, and then Spine Raiser became involved with that as well, or they were already involved, so we kind of got involved with both of them at the same time. They’ve been great, getting us reviews and interviews and things like this. They’ve really helped us out a lot. They helped us getting, you know…

Naomi: …full distribution and all that.

Naomi: Otherwise, whenever we’ve released albums before, we’ve done all the work ourselves – sending it out, promoting ourselves, making ads, all that kind of stuff – so it’s been nice to have all that taken off of our hands. Finally. For once. So it’s good actually.

I understand that you guys recently got a new drummer. How did he come to be a part of the band, and how has that been working out?
Cactus: He serves us beer at a bar called Ronnie’s, and our goal to have every member of this band working at a bar is slowly coming together.

Naomi: We might all have to leave the band except for them now. [laughing] Yeah, and he’s also a friend and someone that we hang out with. And actually, I work in film and so does he. So we got to know him really well, and he was a friend of the band before he became a member, and when our last drummer left he immediately stepped up and said he wanted to play with us. Now, we’ve been practicing for about a month and a half, and we’re all really happy with that. It’s better than it ever has been before.

If you guys had the chance to play with any musician or singer, dead or alive, who would it be and why?
Cactus: Oh really, eh? Well, for me personally it’d be Johnny Cash. Johnny Cash and… my all-star band would be like, Johnny Cash, Neil Young, Slash, Angus Young, Frankie Stubbs…

Just retarded amounts of guitar?
Naomi: He said one!

He’s not even in the super-band! [laughing]
Naomi: I actually had a really weird dream last night that we got to play with Blondie; that we opened up for her, but she was still young, and we were talking, and she was really, really nice, and we were having a good time, so I guess I would say that right now. I did! We were somewhere else, too. We were like, at a resort somewhere. It was great! I didn’t want to wake up.

Cactus: Oh, and MOTORHEAD BASSIST from Motorhead, he’d be pretty cool to play with, too. Get some bass in there, right?

Naomi: Actually, one band that I’d say we all wanted to play with really badly was NoMeansNo, which we actually got to do at the Horseshoe a couple of years ago… so that was really cool, too.

Okay, so you guys have a show in Ottawa coming up in early May, and two Toronto shows, and you mentioned that you’re planning on writing and putting out a new record soon. What else lies ahead for the band?
Cactus: We’re going to be on a tribute compilation very soon… a tribute to a band called Leatherface from the UK. They’ve been around since the late 80’s, have released tons and tons of albums, have a big following everywhere. Except Canada for the most part. [laughing] And so we’re going to be on that, and it’s going to be a great comp with bands from all over the world on it. What else?

Naomi: Well, we’re going to try to record something soon. We said that. And hopefully we’ll be able to do a video this year as well.

Cactus: And we plan on touring the States, hopefully, sometime in late summer, early fall.

Naomi: And more of Canada.