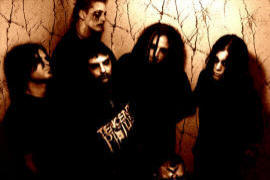 While you might think rickets is a medical term used to describe a child with a bulky head, it’s also a hard rock band. Rikets is a six-piece band originating from Cleveland, Ohio who is quickly gathering lots of attention in the hard rock community. The group’s debut EP Anything For the Devil has been receiving much praise since its release last year and the band has been hard at work promoting the disc for months now. PGA caught up with Rikets’ lead singer Scott Rose in the midst of the band’s Spring tour to ask a few questions about what’s going on with the band right now and whether any of the members were kept out of the sun as children.

Rickets is a disorder found in children involving weakening of the bones caused by a lack of vitamin D or calcium and insufficient exposure to sunlight. Not to make light of the disease, but how did the band come up the name Rikets? Were any of the guys not allowed to see the sun?
Scott: Well the name pretty much came from just a thought… I was driving around listening to the shit that had been tracked and all I could think about was just nasty, dirty shit… and “RIKETS” came into my head and I was like… yeah. So it’s just a weird thing man… and everyone misspells it.

The band Rikets is composed of six members in total. Who were the first two band members to meet and how did the band eventually come together?
Scott: The first two “band members”, if you could say that, were actually Ben Schigel and I if you wanna say “band members”. Ben has always been an “honorary member”, it was actually him and Logan that convinced me to start writing again and both of them were there every step of the way; Logan on the phone and Ben in the studio. Ken Obloy was our first guitar player and first guitar player I wrote with in RIKETS, but he has since moved on to pursue other avenues. Tony Gammalo was a big help in the beginning as well.

You guys of course originate from Cleveland, Ohio, the home of the Rock and Roll Hall of Fame as well as a city currently with a very strong metal scene featuring such bands as Chimaira, Switched and Erase the Grey. Why do you think so many talented alternative rock acts are currently emerging from the city?
Scott: Because it’s the same person signing most of the acts that come out of Cleveland… Thom from Corporate Punishment Records. The dude’s a workaholic.

Your band’s music and sound has received all sorts of different classifications from metal to electronica to industrial to hardcore to grindcore and a mixture of all those different genres. How would you personally classify the band’s “sound?”
Scott: I don’t think we have a “SOUND”. It’s more of just whatever comes out man. Some people like to limit their writing to a classification… we don’t. It’s natural and it’s premeditated.

Your debut EP, Anything for the Devil, has been out for several months now and has earned the band a lot of attention. How do you personally feel so far about the fan reaction to the EP?
Scott: I think it’s great. We’re lucky to have such dedicated fans. Even when the chips were down at one point, the fans stuck with us and grew, it was amazing. Now that we’re touring so much we get to come out and meet all these people that were there supporting us… it’s been awesome.

Anything for the Devil was of course produced by Ben Schigel, known for being the former vocalist of Switched and his production work with Breaking Point, Drowning Pool and Chimaira. Why did the band decide on enlisting Shigel to produce the EP and what assets do you think he brought to the table in the making of the record?
Scott: Ben’s always been a friend and we’ve both always been into each other’s music and shit… so it was just the right choice. We were already working together on these tunes before we even planned on putting out a record… the dude just brings the best shit out of you. He knows how to get a good performance and he’s amazing behind the board. He’s pretty much a genius.

The title of the record Anything for the Devil is a cool, dark sounding title that sounds like it has some significance behind it. Why did you decide on this title for the record and is there some deeper meaning behind it?
Scott: No comment.

Not only did you score a pretty significant name to produce Anything for the Devil, but you also secured the services of former Machine Head and Soulfly guitarist Logan Mader to mix the disc. How did you first meet Mader and how did he end up being the one to mix the record?
Scott: Again Logan is a old friend and he was producing bands and we just kept talking about it and when we ready to do it he’s like, “…you should let me mix your record”… I’m like, “alright!!” He again, the same as Ben, he’s just amazing. We definitely lucked out by having the production team we did because it doesn’t get much better than that.

Even though the EP has performed well, it is only five songs in length and fans of the band are likely getting anxious for something more. Is there a timetable yet for when we can expect a full length debut album from Rikets?
Scott: Were trying to get it done and out by the fall… the new shit is just a breath of fresh air.

The band has been on the road now since about mid-March and from here until August it’s going to be pretty much non-stop touring. How are you guys able to stay sane being on the road for such extended periods of time?
Scott: I guess you gotta be born for it… it’s an acquired taste… we have a blast!

The present seems to be going quite well for Rikets. What are the band’s plans for the rest of 2006 and beyond?
Scott: Non-stop touring… new record… world domination.  [ END ]