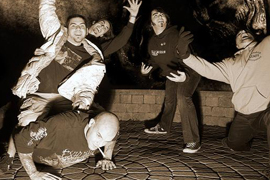 Death metal can reach people all over the world. Whether it’s a giant scene such as Gothenburg in Sweden, or a small hometown scene, there will always be those hidden gem bands… those certain bands which arise from the dirt and make something for themselves. Porphyria are in the process of becoming one these aforementioned bands. All of us locals in another country know about them already. And with only one EP that was released independently no less, Porphyria’s music is sure to boom once the band gets on a label and get music out to even more fans. Here is a chat with guitarist Tom Couture.

Let’s start this off easy, who are you and what do you do in the band?
Tom: My name is Tom Couture, and I play guitar mostly, but I guess you could count booking shows, website, MySpace as other jobs in the band that I do.

I’ve heard nothing but positive things about the EP, and for good reason. It owns ass, straight up. Any plans for a new album anytime soon?
Tom: Even though we haven’t found someone that we’ve wanted to put out the EP we recorded last year, we do plan to record a full length maybe including 2 or 3 of the songs from the EP. With all the shows we play and only getting to practice once a week, if that, it doesn’t leave us with a lot of time to write. We’re trying to change that though. When we do go back we’re most likely going to hire Ken Susi once again to record, produce the album and we’ll have more than 3 days to record.

How cool is it to be unsigned and playing with huge bands, such as Cryptopsy and Neuraxis?
Tom: It’s really an honor for us. We’ve gotten to play with Cryptopsy a couple of times now. I’ve been a fan for a long time and have seen them a bunch before Porphyria so it’s really weird being able to share the same stage. Playing before bands like Vital Remains is just ridiculous man, and to get props from Dave Suzuki is fucking crazy.

Are there any labels looking to pick you up at the moment?
Tom: We’ve talked to a couple, the 1st label who contacted us that looked somewhat promising ended up seeing what we looked like in some pictures and didn’t feel we fit the ‘looks’ of his label. We obviously got some laughs out of that one. Other than that, no one has really thrown any good offers at us yet.

After June 2nd, there are not any dates scheduled, or at least announced on your MySpace or website. Any plans for a future tour coming up?
Tom: We attempted a 2 week tour earlier this year and made it to Cleveland, OH. We quit while we were ahead and just went home after the band we were with were forced to drop. It just wasn’t worth it for us to keep going on that tour. Our vocalist Tim drove 13-14 hours straight back to MASS until like 8am in the morning. It’s amazing what he can do on Dunkin’ Donuts coffee. As far as future plans to tour we’d love too! It’s just a matter of it being an organized tour that’s setup with little to NO days off. I mean if we’re gonna lose money, we need to lose money and play as many shows as possible and not sit in the parking lot of a Wal-Mart for an entire day.

What keeps you writing death metal over other genres?
Tom: It’s fun and challenging to us. We just write what we feel and try not to force things out. I mean we don’t try to be as fast as we can, or as technical as we can though sometimes it turns out that way. Most bands do speed and technicality much better than us but it doesn’t matter to me. I love playing.

Describe a typical Porphyria show.
Tom: If it’s 21+ there are a lot of drunk people that yell ‘POORRRFEEARRRIAAAA’ a lot. Sometimes people kill each other, sometimes not. It’s great seeing people head bang to your music, even just a bob of the chin is enough for me. It’s about having fun and as long as people have fun that’s all I care about. Whether we’re playing a larger club, or a basement show it doesn’t really effect how we play unless we can’t hear each other on a large stage. Freakin’ sound guys.

After a show is said and done, what do you do in the time after?
Tom: After a show usually consists of a long drive home for most of us. We all have day jobs, girlfriends, and other shit going on.

Where is your favorite place to play a show and why?
Tom: Hmm, I dunno man! we do play in MA more than anywhere. NH kids know how to hang. I personally enjoy playing small shows, big shows or whatever. Sometimes I get kind of discouraged if we have an off night due to lack of practice but honestly, for the minimal amount of time we practice I’m even surprised how tight we are. I would give anything to be able to practice 2 or 3 times a week if not more!

Any advice for death metal bands out there?
Tom: Just keep having fun and being brutal. I know it’s tough to hit other shows when you’re busy with your own band but try your hardest to support other bands. I know this first hand how hard it is to balance a band, girlfriend, work and still go to other shows.

Shout outs?
Tom: All the NH kids who have supported us since our first show in June of 2004. Any new fans who come out to our shows, it really means a lot to us. Anyone who comes up to us after we play to tell us ‘good show’ or whatever. People who have asked us to play shows without you we’d just be practicing. I don’t know. Thanks for the interview.  [ END ]