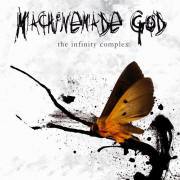 Formed in Germany during summer of 2003 was the metalcore/hardcore band Machinemade God. After putting out only one demo, the band found recognition and their first full-length album, The Infinity Complex was conspired. Since then, they have been touring and promoting the album with bands such as God Forbid, As I Lay Dying and Caliban. For production the band sought Hatesphere’s Jacob Bredahl. They picked Jacob because in hearing his past productions the band knew he could keep to the style they wanted for the album. Although I’m pretty sure they could have just went to Ken Susi for production, considering that this album draws similarities to Unearth’s The Oncoming Storm.

The whole metalcore scene these days is getting far too generic and bland. Bands are just jumping on the bandwagon without much new to offer. Furthermore, with the popularity of the whole genre now, older bands that I liked and listened to a lot before are now starting to lose their edge. For example, some of what I liked about As I Lay Dying’s Frail Words Collapse can be heard in The Infinity Complex. The roughed out, not entirely clean guitar work keeps it sounding metal and adds that extra bit of “realness” to the album. But with Shadows are Security, the whole scene opened up and got incredibly popular. As more money poured into the newly popular sound, these “gritty” aspects were sacrificed. In some ways, a more cookie cutter metal style was born; ultimately sounding too computer re-mastered with less actual recording.

The lyrics on the album are overdone no matter what genre you’re naming. Reading through the lyrics, it’s as if the band had no creative spark left in them and rewrote the same song over and over again. This has the semi-exception of “Kiss Me Now Kill Me Later”, which still follows the same trend as the rest of the album’s lyrical content, but is better written. You can only hear songs about break ups so much before you seek out something more creative to listen to and grow on.

What I did like about the album more than anything was the instrumental track “Butterfly Coma”. Although still yet another metalcore style-following song, they got this one down better than a lot of the other shit I have heard. Everything in it flows together perfectly with a very catchy melody that can just about sink you deep into a trance. Another standout song music wise is once again “Kiss Me Now Kill Me Later”. I was overcome with the impression that the band’s true sound seeped through on this track. Machinemade God can play Swedish sounding metal with harmonics pretty well all the while adding the metalcore/hardcore mix to it.

For a band’s first album after only one demo, this is not a bad release. The production kept feel to the music, and they can play fairly well. But just like the bands that have made it big, there is always a start somewhere. Room to grow and increase talent on every album is crucial, and there is a big amount of potential for Machinemad God to evolve into a great band. Future releases should get better if the band can step up to its potential. This album is decent enough, and if your into the whole metalcore/hardcore scene, then I’d suggest picking it up. And if not, then I wouldn’t bother wasting your money on it. Lack of creativity in a lot of areas lowered my “grading” of the album, nevertheless there still remains an anticipation to hear future releases and material.  [ END ]