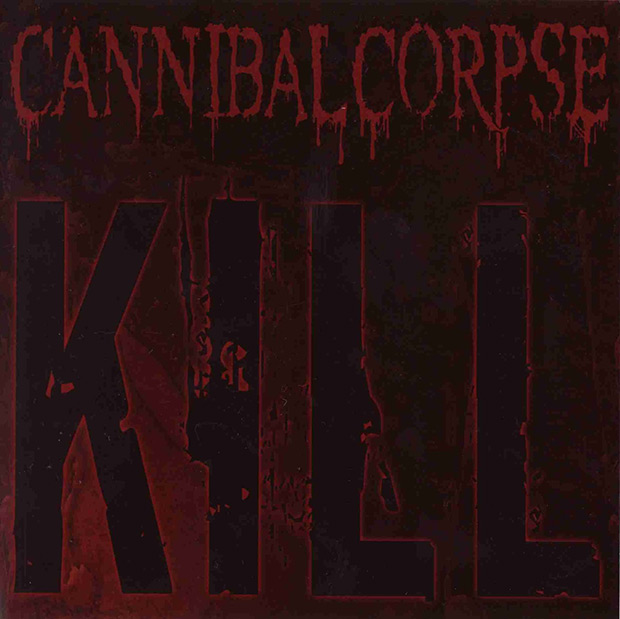 Leading death metal today is Cannibal Corpse. For over 15 years they have been one of the bands keeping death metal active and setting the standards. Ever since their first album Eaten Back to Life, they have been consistent with their sound, yet still getting more technical over time. Cannibal Corpse have had their first three albums banned from being played in many different countries, including Korea, New Zealand, Australia, and Germany. Within the band’s career thus far, they have sold millions of copies of CDs and have went on to be a household name. All this accomplished with little to no promotion, minimal video play, and no radio time.

Lyrics have always been one of the outstanding things that classify Cannibal Corpse. Their songs include subject matter pertaining to rape, murder, and sodomy and beyond. In a nutshell, anything controversial and gore related composes the lyrics to their music. Kill is not an exception to the trend either; the lyrics on this album are just as shocking as ever. “Heads removed of their faces lay by my feet. Chopped and hacked, they bodies detached. Eyes and teeth are violently smashed. Gruesome acts.” That was an example taken from the song “Brain Removal Device.” It clearly conveys the point being made about the gruesomeness that is Cannibal Corpse song writing. And of course, none of this could be pulled off without frontman George “Corpsegrinder” Fischer. George’s low, fast, yet still clear singing style brings it all home and adds a bone chilling horror factor to the band.

The sound quality on this album is ridiculously well done. You can hear the grittiness of the in-studio recording, but the album remains clear enough that it stays appealing to the ear. For a death metal album, that is exactly the sound to aim for. In my opinion, the drum tracks exceeded the group’s preceding album, The Wretched Spawn. Paul Mazurkiewicz adds a lot more blast beats into the mix, which previously were next to none. The guitar is old school Cannibal Corpse at its peak. Heavy, fast, and semi-technical… what the band is all about. It is as if they take their previous work, and then blew a breath of fresh air into their riffs… heavy as ever, but still unique enough to differentiate the songs from their previous albums and material. With all the good must come some bad though, and the bad in this case took form when Jack Owen fled to keep his band Adrift up in arms. His absence on this record was noticeable, but it didn’t take away too much from the album overall.

Another thing that I found disappointing this time around was the cover art. I have come to expect the norm from Cannibal Corpse art. Which was something that I could show to my teachers, and friends just to freak them out and turn stomachs. Although the inside cover behind the disc did somewhat make up for it, the main cover was not your “typical” Cannibal Corpse. The standout song on this album has to be “Make Them Suffer.” It is one of the catchiest songs the band has put out in a long while. The vocals were about as melodic and sing along as you can get with “Corpsegrinder” on the mic.

Throughout the whole album, Kill is pure Cannibal Corpse. Heavy, fast, semi-tech, and lyrics that make you want to get up and cause violence in any way possible. The brain bashing amount of blast beats keep you headbanging, an element which was missing on The Wretched Spawn. Mind you, what The Wretched Spawn had with Jack Owen is missing in Kill. Changes aside, Kill certainly proves just how and why Cannibal Corpse are still today setting and keeping the death metal bar extremely high. I give this album an 8.5/10, if you’re a death metal fan, you won’t be disappointed.  [ END ]