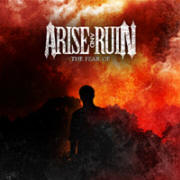 Metalcore is getting so generic that you could write up a math formula for the songs. Bands are jumping on the band wagon quicker than the Trix rabbit is at any chance he can grab that delicious cereal. With that said the cauldron of new bands spills over with almost the exact same sound. I’m getting sick of bands getting further publicity and a wider audience than bands who deserve it more. But then, with all the shit aside, there will always be those that blow your mind. This is where Arise and Ruin come into play, from start to finish the new EP The Fear Of, will rip you apart. 5 songs and 15 minutes of pure mayhem along with 3 videos, everything a good EP should deliver.

Arise and Ruin hail out of Guelph, Ontario and formed in June 2005, but have been together for much longer under the name Pure Blank. The new EP was produced by none other than the metalcore legend himself, Ken Susi. Since June of 2005, Arise and Ruin have played shows with the likes of Misery Index, Despised Icon, A Perfect Murder, Tears From the Sky, and Beneath the Massacre to name a few. The Fear Of has been receiving plenty of promotion from the band even starting well before it was released. This includes constant touring from major venues all the way down to basement-like stages.

The music itself has a lot of emotion in it. From the ridiculously catchy riffs to the vicious breakdowns, you can tell that there’s a lot of work put into it. The mix of Euro thrash and polished up metalcore blends together for a superior sound that appeals to any ear. Then in the song comes something unheard of in the genre today, breakdowns that don’t suck. They get you pumped up whether you’re walking down the street listening to your Ipod, or blasting a stereo. The EP’s lyrics are well written well; basically hardcore messages from a metalcore band.

The videos in the enhanced section of the CD don’t disappoint. The music video for “In Life” was done by Elnino Cinema; incredibly well I might add. Before the EP was release I watched the video online a few times a day, and voted for it on much loud daily. Air time on MuchMusic was happening before the EP was released and with a great response too! Now it comes with my CD, no loading or waiting to watch it on TV. As an added bonus the EP comes with the live “In Life” video and the live video of my favorite song, “Rex Butcher”. Both live videos are filmed and edited next to perfection and show off the intensity of what Arise and Ruin give off to a live crowd.

You can’t call yourself a metalcore fan if you don’t pick up this EP soon. It’s everything you could want in a band from the genre. 5 songs and 3 videos for under 10 dollars is one of the best deals in a long while. For the ass-kicking power that Arise and Ruin give off, The Fear Of gets a 9.5/10. Pick up this album and you won’t look back and regret.  [ END ]