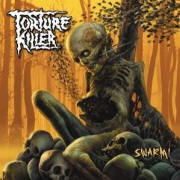 All I need to say to sell this album to most death metal fans is this… CHRIS BARNES on vocals! Yes, the former Cannibal Corpse, and current Six Feet Under vocalist, lends his pipes to this Finnish groove filled death metal splatterpiece. The band is made up of members of Demigod, Andramalech and Torn. Oddly enough, they started out as a death metal cover band… one of the bands they covered was Six Feet Under.

The music is quite a bit different than one would expect. This is more mid-tempo death groove metal than a hyper blast attack. Each song creeps along like a fiend stalking his prey. The songs remind me of The End Complete era Obituary at times with some melodic infusions. Oh, and did I happen to mention the classic artwork of Wes Benscoter is the visual representation of the album? Truly a sick pleasure.

The album opens with “Swarm.” This is a great opening track for this type of album. It reminds me of the opening theme to a splatter flick. “Swarm” slithers its way to “Forever Dead.” A groove heavy track that is infused with some interesting dissonant guitar work. “Funeral for the Masses” is next. The opening growls sound odd… perhaps they have some effects on them. Besides that, the song is quite catchy. Barnes goes between guttural growls and nasally screeches that compliment the song well.

“Multiple Counts of Murder” plows over you next like a steam roller then transitions into a trance like chorus. This morphs into some tasteful solo work. “Obsessed with Homicide” leaves me limp. It isn’t really bad… it just isn’t really good. Not very memorable. “Sadistic” renews hope as this crushing beast of a song is let loose. This double bass heavy track reminds me of old Six Feet Under. Next is “Cannibal Gluttony”… of course. This track continues the double bass heavy theme of the last song. The vocals syncopate well. The song then brakes down into an almost progressive rock breakdown. Sounds odd but works wonderfully.

“ I Killed You” starts with Barnes whispering then straight into his trademark growl. This track simply… kills! “Heading Towards the Butchery” sounds like it was recorded with a boom box once you start the track… then all of a sudden kicks you in the balls, makes you puke and then laps it up. How would one end any album of this genre properly? With “A Violent Scene of Death.” A Great track to end this experience of Torture and homicide.

I must admit that I was skeptical when I received this disc. I have not been a fan of the work of Barnes since Cannibal Corpse and the first two Six Feet Under albums. This album will renew old fans as well as rope in and strangle new ones. Swarm will enslave you. Torture Killer will punish you… and you will like it!  [ END ]