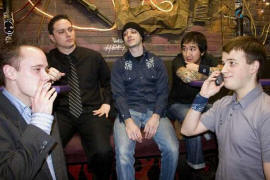 I’d be a liar if I said I was a diehard Hostage Life fan before ever doing this interview. In fact… I’m not positive I’d ever even heard of them. In any case, they put on a wicked show, and I must say… I’m hooked. Over the past four years, Hostage Life – whose members all come from five former Toronto-based bands – have made quite a name for themselves. After sitting down at the Underground Operations show in December with Paul Miller (drummer, vocalist) and Hai Vu (guitarist), I learned a lot about Hostage Life and it’s roots.

You guys formed in 2002 from the remnants of a couple other local bands – they all split up for whatever reason. What sort of musical backgrounds did each of you bring to the band, and how has that evolved into the music you play today?
Paul: All of us played in bands of varying styles before we came to form Hostage Life. I was in a very juvenile pop-punk band when I was younger, and Eric was in a hardcore band called Engage. Hai was in more of a skate-punk band, if I can use that term?

Hai: No, it was heavier. Skate-punk band? Whatever. [laughing]

Paul: Okay so, Hai was in a demonic rock ’n’ roll band called Blank Stare. Colin – Marilyn’s Vitamins, and Patrick was in the Atomic Drops, which kind of had a dirty, punk rock, social distortion feel. So all of us came from really different – well, within punk rock – different backgrounds so we all definitely had different ideas on the music we wanted to make. Aside from that, what I think is very interesting is that all of us listen to pretty much radically different music than each other, so it kind of formed in a strange way like that.

Paul: And Colin is the guy with the stick in the cauldron.

Which bands have had the most influence on you guys musically?
Paul: I think an easy answer to that, and you probably get tired of people saying this, but the Clash are I think the band that would unify us all in terms of a band that we would all really respect, in terms of musical direction and lyrically and attitude…. That’s definitely a band that are pretty highly revered I guess. I would say that’s the main one. We’re recording a record right now which is going to be put out by Underground Operations, probably March 2006, and a name that keeps coming up in the studio is Bruce Springsteen also. The Bruce Springsteen and Clash influence is really kind of seeping into what we’re doing now, so it’s going to be a lot different than the EP, which is a bit more straight-up punk rock.

Okay. So as you were just saying, your debut with Underground Operations was an EP, six tracks called Sing for the Enemy. What song seems to be the most popular off that album and why do you think it’s so popular with your fans?
Paul: I would say “Money Parade” is the song that, y’know… if any song were to strike a chord, it’s that one. That’s the one that we usually get the best response for and the one that seems to be the most memorable for people. [to Hai] Do you wanna take a shot at why that is?

Paul: I think that’s our darkest and heaviest song out of what we have on the EP. I would say it’s our most aggressive and it has a bit more of a different aspect of Hostage Life. There’s a bit more screaminess to it, a bit more aggression. I don’t know, I think that style works pretty well for us and people caught up to that.

Alright. You guys are recording your first full-length album right now. It’s most likely going to be called All Day, Every Day?
Paul: Correct. But it’s pronounced “Allday. Everyday.” [laughing]

Any word yet on when you expect it to be released?
Paul: We’ve had a small bunch of setbacks in the studio, like… it seems like every instrument has one black cloud over it, and although it’s coming together at a good pace, there’s always things in the studio that… well, this is the first time that I think all of us have ever done a full-length album – aside from Colin with Marilyn’s Vitamins – so it’s a very different process than we’re used to. Everything is really focused and concentrated on getting the notes perfect, perfect, perfect… but then also trying to balance that with the feeling, and not making it too perfect. It’s coming along well, and we expect it to be done sometime this month or next month. All in all, it should be out in March, and then we’re gonna tour our asses off to support it.

I saw on the Underground Operations website that there aren’t any future show listings you guys have on there actually. So are you putting a hold on things to finish up the album or are you just waiting to see what the future has in store?
Paul: Doing this show was really important to us. There was supposed to be an Underground Operations tour that would extend far past Toronto, but plans changed, that didn’t happen, so this was going to be the only show on that ill-fated tour. So it was really important for us to do this. Other than that, we’re really focused on getting this album done right. We had a few show offers but we’re turning them down because this album is really important to us. This is what we want to put our lives on hold for for the next year, two years, whatever. We wanna be really proud of this so we’re not playing very many shows these days, I don’t know…. This record, I really hope is going to be something that we’re going to be extremely proud of. We’re making it really important.

Hai: It’s really hard to focus on too many things at once for us and so we’ll just concentrate on the album for now.

Okay. So for the past two years or so, you guys have landed yourselves on the bills with some big names. People like Rise Against, Alexisonfire, DOA… How did you end up playing with these bands and what sort of an experience has that been for you guys?
Paul: How did we end up playing those shows? It’s not a very interesting story actually….

Hai: No, it’s not. Well, it is kinda interesting.

Hai: Well I don’t know, I was just saying that a lot of those shows seem to be because we were asked last-minute because other bands dropped out. We don’t put that in our resumé, and maybe you shouldn’t print that or whatever….

I’m not promising anything! [laughing]
Hai: Yeah, well, we’d get offered really… just shows that we believe are above our level in a way cause we’re just really getting started, and the next thing you know, it’s like, “Oh, well, do you wanna play the Docks?” and we’re like, “…Yeah!”

Paul: It’s an exciting thing to do that. Playing the Docks was the largest crowd that we’ve ever played for. It’s cool cause it helps us to hopefully get used to stuff like that whereas… well, I mean, Hostage Life are never scared, right? So it’s not about that. It’s about just being accustomed to playing different levels of shows. I mean, we still play dirty venues in Toronto…. We’ve played a really weird array of shows. We played a 50th birthday party. There was a lot of kids there. “Underage” is not extreme enough, there was, y’know, under seven. And then like, frat parties and keg parties. We’ll play anywhere. Sometimes the stupider the show the better.

Hai: There seems to be a consensus in the band that, if it’s fun we’ll do it.

Paul: And also a big thing for Hostage Life is finding stupid shit that makes us laugh, too, so if we get asked to do a 50th birthday party… we’ll probably do it.

Hai: Which we did.

Paul: Yeah, and actually one of the wives at the party told us that we were pretty good, but we could stand to work out a little bit more. I was a little too skinny, but apparently Eric was a little too fat.

Hai: But then he ended up running a marathon –

Paul: – and he finished it.

Hai: So he took that into consideration.

Wicked. So you spent most of 2005 touring in Ontario. First, you were on the Fuck Frosty tour back in February, and then just random shows – the majority of them have been in Toronto.
Paul: Yeah.

Hai: I don’t know, the last UO tour was really fun at the Opera House. The Rise Against show was really fun, and Edgefest was fun…. I would say probably the Opera House show because it was really considered our show, with the whole UO group. It was just a bunch of people getting together and having fun and hanging out, much like today is hopefully. So far it’s been good, except we’ve been sitting around for the past four hours.

Paul: I’ve got this can of Pepsi though. It’s quite delicious.

Alright – so one last question. If you guys could follow in the footsteps of Bill & Ted and go back in time, is there anything you’d change in terms of how you started out? Any advice or information that you wish you had’ve known then that you know now?
Paul: I thought you were gonna ask us which historical figure we’d bring to dinner, or bring to our high school rock show.

I watched it last night.
Paul: I’m more familiar with the sequel. Um… anything that we would’ve done differently? I don’t think so. I mean, something else in my life that’s as important as Hostage Life is I run my own business, it’s called SAMO. We press CDs and vinyl, and in that… in running it, you make mistakes naturally, cause no one tells you what to do. You have to figure these things out for yourself. Whenever that happens it’s like, “Oh yeah, cool, well… now I know.” I never get really that frustrated if something fucks up cause you gotta go through that shit and you’ll be all the smarter for it. So, I don’t know. [to Hai] Is there anything you would change? It’s hard to say.

Hai: Yeah, well with all these recording issues that I’m having I guess that I’d go back in time and buy a new guitar.

Paul: I would buy a drum set. I don’t even have one.

Hai: You can do that in the future!