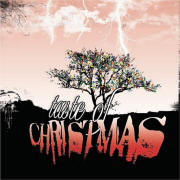 Looks like some people are going to open emo in a box this year, Oh’ I’m kidding, as you’ll notice I tend to mock the term emo, and why not, everything is emotional isn’t it?

Taste of Christmas on a marketing side was undoubtedly a great idea. I just don’t know if Christmas and Rock go together, but that’s a personal thing I guess. Christmas songs tend to remind me how much I hate shopping that time of year, so this CD kinda comforts me. So why not have a few of your favourite artists cover Christmas tunes? This is one of those CD’s you’ll only whip out in December. So crank up those Ipod’s while shopping to rid out Mariah Carey’s classic “All I Want for Christmas Is You”.

The best track on the compilation is the opening track (and only track to make it to video), Steel Drum Corps rendition of John Lennon’s “Happy Christmas” “War is Over” which features Bert McCraken and Quinn Allman of the Used, and Airin from Sugarcult. This was a great song to showcase the band and what they do. Bert delivers a clean and poise mannered rendition of the classic. The band has brought back the Stomp way of performing, using garbage can lids or anything steel-like for that matter. What’s interesting is that fans of the Used or Sugarcult or any band in that genre for that matter, probably haven’t heard the original track in its entirety, so by having one of their “rock” idols cover it, you open the can of the meaning of the lyrics to a whole new breed of future voters.

Bleed the Dream’s “No Smiles on Christmas” doesn’t really sound like a Christmas song, unless you really tune into the lyrics, but regardless, I won’t mind this being on rotation on my Winamp throughout the year.

This album is great if you work at West 49 or HMV for the holiday season, no one wants to hear Britney Spears’ “My Only Wish (This Year)” 18, 000 times in a row. I’d also by it for those boring family dinners and have it playing lightly in the background.

Overall, all the bands did (in their own special way) a great job, a Christmas album worth buying, especially Skindred’s Reggae/Rock “Jungle Balls!” So cozy up to your dark, parted to the side haired boyf or girlf and have yourself an emo little Christmas.