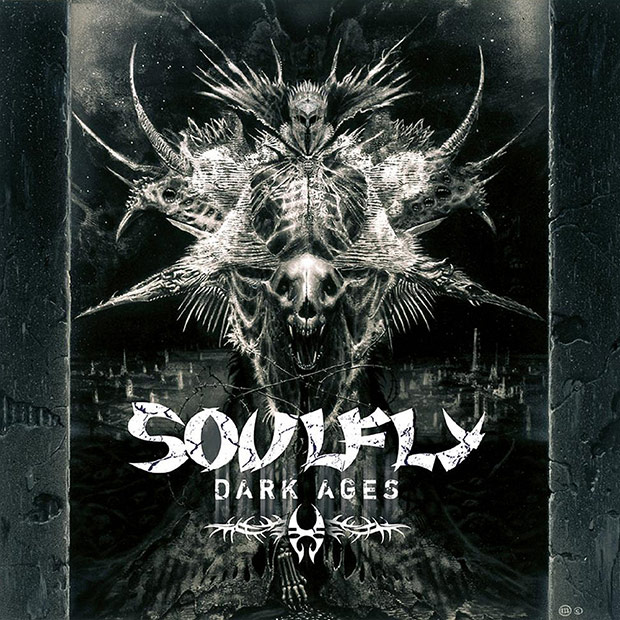 Not since the days of Sepultura have we heard a metal album like this from Soulfly/former Sepultura frontman Max Cavalera. This album titled Dark Ages, is just that, Dark. This is possibly the most straight forward, brutal, heavy, Sepultura-like album Soulfly has ever released.

Songs like “Fuel the Hate” really show Soulfly’s newly found thrash vibe that they have been missing. Another welcome change that is noticed are the solos. Marc Rizzo, formerly of Ill Nino absolutely shreds through his innovative leads, and rips out some of the best solos I have heard in any Sepultura or Soulfly song to date.

Most Soulfly fans considered the bands previous release Prophecy to be very experimental, and possibly their worst release to date by hardcore fan’s standards. I am more then positive all those fans are declaring this album to be album of the year! Soulfly have cut out most of their tribal element and melodic side. It is not totally lost, but it is less noticeable; it definitely takes a back seat to the straight up heaviness of the record that just shines through it all.

“I and I” is a song that sounds like it is something off of the album Prophecy. With its tribal drums and strings, it helps make the album a little more well-rounded creatively. Same with songs like “Soulfly V” the last track of the album; a very melodic and acoustic sounding song right from the start.

Soulfly is back. They are heavy, fast, and bring the thrash. This album sounds nothing like any other Soulfly release, but rather sounds more like a new era Sepultura. This should please all Soulfly fans and anyone who missed the Max and Sepultura days. Max Cavalera is a metal legend. He has built a name for himself by making very creative and experimental heavy music. This album focuses on brutality more then anything, but it shows why Max Cavalera is the legend he is.

Only a legend could also do something like this, record a masterpiece in several countries. The album was apparently recorded partly in the United States, as well as Serbia, Montenegro, France, Russia, and Turkey.

Soulfly really are back, and with their all star line up featuring Max Cavalera (formerly of Sepultura), Marc Rizzo (formerly of Ill Nino), Bobby Burns (formerly of Primer 55), and Joe Nunez (formerly of Stripping the Pistol) they are a new force to be reckoned with. This harsh sounding extraordinarily brutal album is a new chapter in the book of Max and Soulfly. It is worth purchasing and checking out, and makes for a great new addition to any metal lover’s CD library.  [ END ]