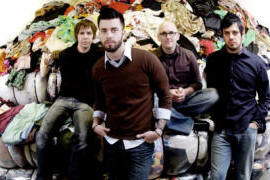 Right out of the warm sunny climate and rock band breeding ground of Orange County, California comes the Christian rock four piece known as Project 86. Despite the fact that the band is just now getting major mainstream recognition, Project 86 has been together for roughly eight years now, released four very successful albums and during this time amassed a considerable fan base across the United States. The band has just recently released their latest disc, And the Rest Will Follow which also happens to be produced by the very famous rock producer GGGarth Richardson. Fortunately enough, PGA was able to catch up with lead singer Andrew Schwab and ask him a bunch of questions about, among other things, how the band got its start, what they think about being classified as a Christian rock band, and what the future holds for the band.

The band name Project 86, to say the least, is quite original and it sounds like there must be quite an origin behind the name. Could you let us in on why you chose this name and the significance behind it?
Andrew: Actually we had the worst time thinking of a name. Names are tough. It sets the tone for everything you do a s a band. We referred to our group as “the project” for many months, until deciding to stamp a number on the end of it. For us being “86-ed” by the music industry was a risk we were willing to take to make music that we love. Ironically, we sold a few records after that.

The four members of Project 86 are all from Orange County, California, a place which has of course produced so many other great bands in the past. What do you think it is about California and specifically Orange County that makes it such a breeding ground for rock bands?
Andrew: Southern California is a haven of dreamers and nomads searching for their dreams. The promise of playing music for a living is worth the risk when you compare it to a corporate lifestyle. Also, there are just more people here, which makes your chances of forming a band greater than, say, if you lived in Salina, Kansas.

Your band has been classified by some as a Christian rock band. Do you agree with this labeling or do you think that calling Project 86 a Christian band is misleading?
Andrew: We are all Christians but we don’t just play Christian events. We don’t play churches. We have toured with band like Sevendust and Finger Eleven, as well as bands like P.O.D. and Blindside. People have always attached labels to bands, but for us its just about playing music.

Speaking of Christian rock, what is your opinion on the current Christian rock scene? Do you think it’s as strong as it was a few years ago when bands such as Creed were bringing it to a huge audience?
Andrew: I guess I never really paid much attention to Creed. Were they labeled Christian? I think music in general has plummeted so far in the past 5 years in terms of revenue that I don’t think anything is as strong as back then. However, bands that have some attachment to Christianity have consistently gained a higher percentage of that revenue in recent years. So basically, whether you are Thrice or Jeremy Camp, you represent an ever-increasing portion on the business flowing through the industry.

You’ve had the good fortune of working with the very well respected producer GGGarth Richardson (Rage, Chevelle); most recently on the new album And the Rest Will Follow. How did you guys first meet and hook up with Richardson and what is it like working with such a huge producer?
Andrew: I think we got a record that sounded the way we wanted it to. He always makes great sounding heavy records.

Project 86 has now released four albums and has been prevalent in the rock scene for over seven years now. How have you guys managed to stick together for so long in an age where bands come and go all the time?
Andrew: This is actually our 10th year as a band! I can’t believe it. We just wanted to put out a record and now we have sold over 300,000 of them. We are very thankful that people care about this music as much (and sometimes more) than we do. Our most recent record even debuted higher than any of our previous four, which shows that we are making music that kids care about. I couldn’t imagine doing anything more fulfilling than that.

Many bands that are able to stick together for a long period of time experience some sort of change or progression in their sound. Now that you’ve released four albums, how if at all do you think Project 86’s sound has developed or matured since the release of your debut album?
Andrew: Our debut was in 1998, and this is actually our 5th album. We have learned how to write songs better on each album, and incorporate increasing amounts of melody along the way without turning down the intensity. Our first record was a post-hardcore record, somewhere between Helmet and Rage. I think the new stuff is much less predictable, much less categorical.

Writing music and creating songs can be such an intricate and involved task. Where do you look to for inspiration and stimulation when you write music?
Andrew: I guess we just look to how we feel when we are writing it. Where is the source of emotion coming from? That’s how I try to approach lyrics. I try to make each album a snapshot of where we are at the time of writing it, both as a band and as individuals.

Over the last decade, you’ve been a part of several successful tours and played hundreds of shows. Of all the shows you’ve played, is there one that stands out in your mind as being the best show Project 86 has ever played?
Andrew: House of Blues, Los Angeles, 2002. We headlined our only show ever playing there to a sold out crowd. It was epic.

The present seems to be going quite well for Project 86, but what does the band have planned for the year 2006?
Andrew: Much touring, hopefully a spot on SNL, and buying our own Jet.  [ END ]