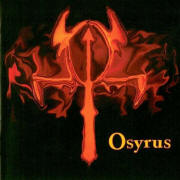 The first song, “Never Change,” on Osyrus’ independent and self-titled album begins with the sound of rain that sets the atmosphere for the entire record. The first songs are like the beginning drizzle at the beginning of a storm. You can feel the intensity rise throughout the CD until the last song, coincidentally entitled, The Storm. Osyrus gives off a hard-hitting, attitude-oriented, kick-you-in-the-face-if-you-don’t-like-me sound that really makes you feel invincible when you are angry. I absolutely loved it.

The songs are catchy enough to have it stuck in your head, but not so catchy that you want to shove a pistol down your throat. The lyrics are almost graceful, and draw the listener in. When listening to these four New Yo’kers, you know how they feel, they focus on so many different concepts that you are guaranteed to relate to at least one song. If you could ever picture that kid in high school that was ridiculously tough, a little terrifying, and most likely clad from head to toe in tattoos singing on key about how he doesn’t give a fuck about what you think of him for a good 40 minutes, you’ve got the sound Osyrus is putting out.

Just the other day, I developed quite a bit of road rage, and to be honest, this CD did not help. I probably should have taken it out. I became a maniac at the wheel flipping off poor elderly people that got in my way and threatening to run over children. So, you should probably use digression when listening to this album. If it can make a 19 year old girl into a monster, imagine how much worse it could get with you behind the wheel. Come on. Be honest. Do you want the blood of a decrepit 90 on your hands? I didn’t think so. Just don’t say that I didn’t warn you.

Though the majority of the album is about the strength of their confidence, and not needing to be a conformist sheep, they do have the occasional soft songs. There are two instrumental songs on this album, and you know what? It really set them apart for me. I love both “Ascension” and “The Storm” a lot. When I am trying to mellow out after having a large dose of road rage, this does it. You couldn’t ask for a more gentle sound if you ripped it out of Jack Johnson himself. Though not every song is as easy listening as some of you may like, I highly recommend picking up this CD purely for its pick-me-up skills. Their confidence radiates so much from their music that it leaves you feeling the same way.  [ END ]