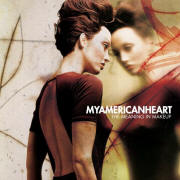 The great thing about purchasing a Warcon CD is that you can get that CD for less then 20 bucks and get a sample of the other bands that are on the label. What’s also appealing is the double packaging including a sleeve over the CD case.

Relatively a new label, distributed by EMI in Canada, Warcon proves a force to be reckoned with.

MAH enjoyed a great deal of success on last years Taste of Chaos tour on the Acoustic Stage and soon became Warcon’s third band to be signed.

Although the average age of the band at the time of recording was 17, My American Heart can and will sustain the fans of the “emo” genre for a while. While there is minimal to little screaming on the record, they’ve got the writing down and great melodies to prove they are a band with heart.

The tone of the record is set by the 52 second intro basically calling out all the fakes in the world.

This album definitely attracts a younger crowd; 15-17 year olds who have just graduated from Nysnc and Jesse McCartny or even Good Charlotte and Simple Plan. Happy Graduation kids, because this will lead to other bands such as Bleed the Dream, who are also on Warcon. And from there these listeners will have heard and will define their musical tastes for a long time to come.

For a debut album it’s pretty impressive, lyrically and musically. It’s safe, and clean and pleasing to the ear. Over time, MAH will be able to take these semi-political/heartache lyrics and create an album with a purpose.

What can we expect for the next album, well they’ve all turned 18, toured quite a bit, and probably broke a few hearts if not gotten theirs broken. There is no doubt that vocalist Larry Soliman has an attracting voice, it would be great to hear more of the band’s influences on the next record.