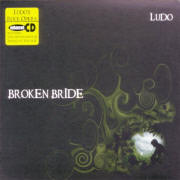 Thanks to Green Day, the world of rock music has recently been reintroduced to the concept of the rock opera. Almost a year and a half since its release, Green Day is still riding the wave of huge success thanks to their punk rock opera American Idiot which has inevitably spawned other similar projects such as St. Louis punk/pop group Ludo’s newest release Broken Bride. While Broken Bride is significantly shorter than American Idiot, the band utilizes the rock opera type format as the EP runs in different parts over its five tracks. Despite the fact that there is probably some concept and storyline behind Broken Bride, I am regrettably unaware of the specifics. At any rate, Broken Bride is an interesting idea and it is a decent listen.

Broken Bride begins with “Part I: Broken Bride,” probably the best song of the five. Lead vocalist Andrew Volpe does his best Brandon Boyd (Incubus)/Doug Robb (Hoobastank) impression during the verses and the song closes with a cool, rocking out kind of finish. “Save Our City” has a very catchy repetitive beat and an interesting choir part sort of like the choir portion of the Killer’s hit “All These Things That I’ve Done.” The song shows some real musical progression in Ludo’s sound from their 2003 self-titled disc.

“Part II: Tonight’s the Night” is a bit more light hearted than the previous track and probably the most radio friendly of the five. The tune has a nice sound to it but I can’t see how it fits in with the whole theme of the EP. “Part III: The Lamb and the Dragon” is a bit reminiscent of Green Day’s “Jesus of Suburbia” with its frequent changes of pace. This song alternates between insanely fast and slower parts and because of it; the song lacks structure and is just a bit too all over the place. Broken Bride finishes off with the piano ballad “Part IV: Morning In May,” Ludo’s best attempt at an epic sounding finish. I found this song to be a little boring and too predictable and Volpe sounds like he’s stretching himself and his vocal style beyond its means.

All in all, Ludo has put together a decent sounding rock opera. Doing a rock opera is an extremely ambitious and difficult project to pull off, but Ludo has composed a few solid songs. One thing that was definitely evident on Broken Bride is the maturation in sound and songwriting of the band. The lyrics and vocals are better and the song composition is more cohesive and fluid. It should be interesting to see if Ludo can continue to build on their sound for their next release.  [ END ]