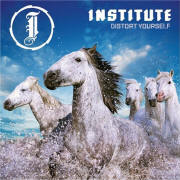 Any fan of post-grunge, mid-90s alternative rock will remember the name Gavin Rossdale. Rossdale was of course the tall, pretty boy frontman for the British, but very American sounding band called Bush (Bush X for a while to all you Canadian readers out there). Sadly (or maybe fortunately?), Bush disintegrated after the release of their 2001 disc Golden State, largely because guitarist Nigel Pulsford was sick of touring and refused to do so ever again. Now over four years have passed and Mr. Gwen Stefani is back with a new project and band called Institute and a debut disc titled Distort Yourself. While Distort Yourself isn’t really all that much different in sound from Bush, Rossdale and Institute have composed a very respectable twelve song debut.

The first single and perhaps the best song on the disc “Bulletproof Skin” comes first. Despite Rossdale’s slightly peculiar lyrics (e.g. “it feels like Christmas in Hollywood”), “Bulletproof Skin” is a solid, straight forward rock tune and it’s maybe the most Bush sounding song of the bunch. The next song “When Animals Attack” has a simple but very cool bass riff and an urgent kind of vibe to it. “Come on Over” also sounds like it might have been a Bush throwaway, but it has a nice sort of starting and stopping pace during the verses.

“Information Age” sounds a lot like a Helmet song, probably due to the fact that Helmet’s Chris Traynor and Page Hamilton helped produce the record. “Wasteland” has an eerie sort of death sound to it until it gets to the loud, hard chorus, a bit too predictable but a decent song nonetheless. “Boom Box” has an interesting arrangement as it alternates between hard and very ballady sounding. “Seventh Wave” and “The Heat of Your Love” are both decent songs, but Rossdale gets a bit silly with his lyrics on the latter (e.g. “deep fried in the heat of your love”).

The most innovative song on Distort Yourself is “Ambulances,” a creepy sounding song about death that is one of the best songs Rossdale has ever recorded despite his trouble pronouncing the word “ambulances.” There is nothing particularly bad about the last three songs on the album, but none of them really stand out or are any different than the rest of the disc. The best of the three is probably “Secrets and Lies,” but at this point, Institute starts to sound a bit repetitive.

Overall, Distort Yourself is a solid debut disc with several respectable songs. The help of Traynor and Hamilton seems to have given focus to Rossdale’s songwriting which seemed to have gone astray on the last couple of Bush records. Not every song is a homerun and at times the lyrics are a bit silly, but Distort Yourself shows that Rossdale might just have a second life in the world of alternative rock.  [ END ]