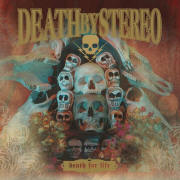 Hard-hitting and in-your-face, and, if that wasn’t enough, a double kick in the nuts with guest vocals from M. Shadows from Avenged Sevenfold (“Entombed we Collide” and “This is Not the End”), which is amazing, and should be on his own band’s record.

What makes Death by Stereo a great band, is their ability to change each release from the last. With new bassist, Tyler Rebbe, DBS takes “metalcore” to a whole new level. The 11-track disc opens with fans chanting “Death for Life,” which is probably the raddest way to open any CD if you ask me because you just don’t expect it.

Who says you can’t hear the beauty of a song, if all they do is scream? Well that’s it in itself; “screamo” has the ability to hit you in the face whether the lyrics are about love or about death. Not everything is cut and dry, and this disc proves it. The most notable feature about this record and everyone will agree are Efrem’s vocals.

“Forever and Day” proves that all bad boys have a soft side no matter how “metalcore” they are. This is the only “ballad” on the album and also the longest song the band has recorded at just over 5 minutes. “I can’t face this world on my own, I keep on searching for your face, I promise that we’ll live forever, forever and a day.” Aww… now watch the female fan base sky rocket!

“This is the End” is the best song to end the album. It sums up the band’s hard hitting guitar driven style with in your face lyrics.

Fans are on the fence about this album, some say there isn’t enough screaming, some say it’s not as hard as the last album, but what people need to realize is that if you want to have Metallica like longevity, you’ve got to take chances and grow as artists, you can’t write the same album twice.

This disc gets 8 in your face punches (with gold rings on them) out of 10. Crankable Tracks: “Forever and a Day”, “Entombed we Collide”, “This is Not the End.”