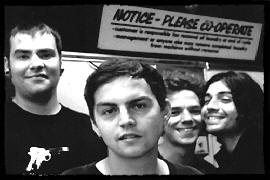 Formerly The Stiffs, Dead Letter Dept. consists of Rob Moir (guitar/vocals), Mike Leblanc (drums/vocals), Steven De Silva (guitar/keyboards), and most recently, Chris Slorach (bass). After signing with Underground Operations earlier this year, the band released their first full-length album; Rock N’ Roll Hates You. Now, armed with a killer live show (which resulted in the death of De Silva’s guitar on December 8th at the Underground Operations show in Toronto… RIP.) the band is touring to promote Rock N’ Roll before going into the studio again to record yet another album in 2006. I had the pleasure of interviewing these guys at the Phoenix, and I’ve gotta say, they turned out to be pretty wicked folks. So wicked, in fact, that we had to scrap that plan, and do an email interview instead… but that’s another story for another time, my friends.

Dead Letter Dept. was just signed to Underground Operations earlier this year. Was there anything in particular that drove you to say, “Yes, this is the label for us”?
Rob: We had a full length written and they asked us to put it out. We asked them if they were going to try and make us change anything and they said no. They let us make the record how we wanted to and everything was great. We have all the freedom in the world with Underground Operations and even though we stick out like a sore thumb on their roster sometimes, they are our long time friends, and we love working with them and someone has got to say it they really do work their asses off for the bands.

Some people label you as being “pop punk”, although your lyrics are about things more important than parties, girls and break-ups. What sorts of causes are you involved in, and what do you think about being called a pop punk band?
Rob: There was a time in the mid and late 90’s where we were really into the Lookout and Mint bands that were playing a poppy version of punk rock and we wrote our first few records in that vein. As for what we think about being a called a pop-punk band now-a-days, that is something certain people in the industry need to do when they are selling or buying something, tag lines, sub genre’s whatever, we play music that none of us in the band can describe, so calling us Pop-Punk is about as productive as calling us trip hop.

Youv’e been together for about seven years, in which time you’ve toured all over Canada, the United States, and Europe. If given a choice, where would you like to concentrate on playing your next string of shows?
Rob: We would like to play Toronto more and get our new stuff out there to as many people as we can, but given the chance we would love to go back to Europe anytime and hopefully the USA. Toronto aside, southern Ontario is great for rich kids wearing eye liner and glorifying suicide so we tend to not really fit in here but that’s also how we like it.

You released your full-length EP, entitled “Rock ‘n’ Roll Hates You”, last spring. What kind of a response have you gotten from your fans?
Rob: A cross between praise from the highest level to some kids reacting like they were getting socks for Christmas, some people bought it thinking it would sound one way and were pleasantly surprised to hear it as something different, I think it’s great to be a nice surprise.Our next record will be an even more surprising record so who knows what people will think.

Do you guys have plans for a video anytime soon? If so, which song and why?
Rob: We go back and forth with this idea a lot, there are some great videos out there, check out the first three replacements videos they were just a guy listening to a record tapping his foot for 4 mins. I’d love to do something like that, Steven and Mike really want to do a Wizard Of Oz theme which could be really funny, I also really liked The Cosntantines video of a raccoon licking peanut butter off a lens, if we came up with an idea we thought would be cool then we would push to do it. Although we still feel slightly relieved every time we get denied video grants from VideoFACT, I have found that most “directors” in this city have no passion for anything then an award and emulating what works so fuck those poseurs haha.

In addition to touring and releasing the new album, Dead Letter Dept. has had three songs featured on the show “Degrassi: The Next Generation”. How did that come to happen?
Rob: I’m not sure, we just got another one in this show Instant Star show, none of us really watch tv so its hard to say how these songs have been used, we only really hear back from fans and stuff. I guess someone at Epitome pictures likes the band or something, it def helps us out in certain areas and aside from Degrassi, which is a pretty cool show, if someone is going to give us money to use our song in their lifeless television show or product and if we don’t have reservations about it (as in refusing to help out car, fast food, soda or alcohol companies with music) we will continue to do this. We don’t really come from places where we can turn down money.

You guys are coming back to Toronto on December 16th for a show. What other
bands are on that bill?
Rob: The one I am most excited about is Dollarama but some other great ones such as… Matthew Johnston, Kover, Silent Seymour.

What are the band’s plans for the new year? Are you planning on taking a break from touring, or are you gonna ride this wave out a little longer?
Rob: We will be working on a more stripped down record, something that will pay more tribute to what we are actually influenced by, I have always written these songs and finally got over some fears and know we can totally play folkie, alt country type songs and everything will be fine. We didn’t think people would understand ‘Rock N’ Roll Hates You’ so what’s the point of worrying about the next thing.  [ END ]