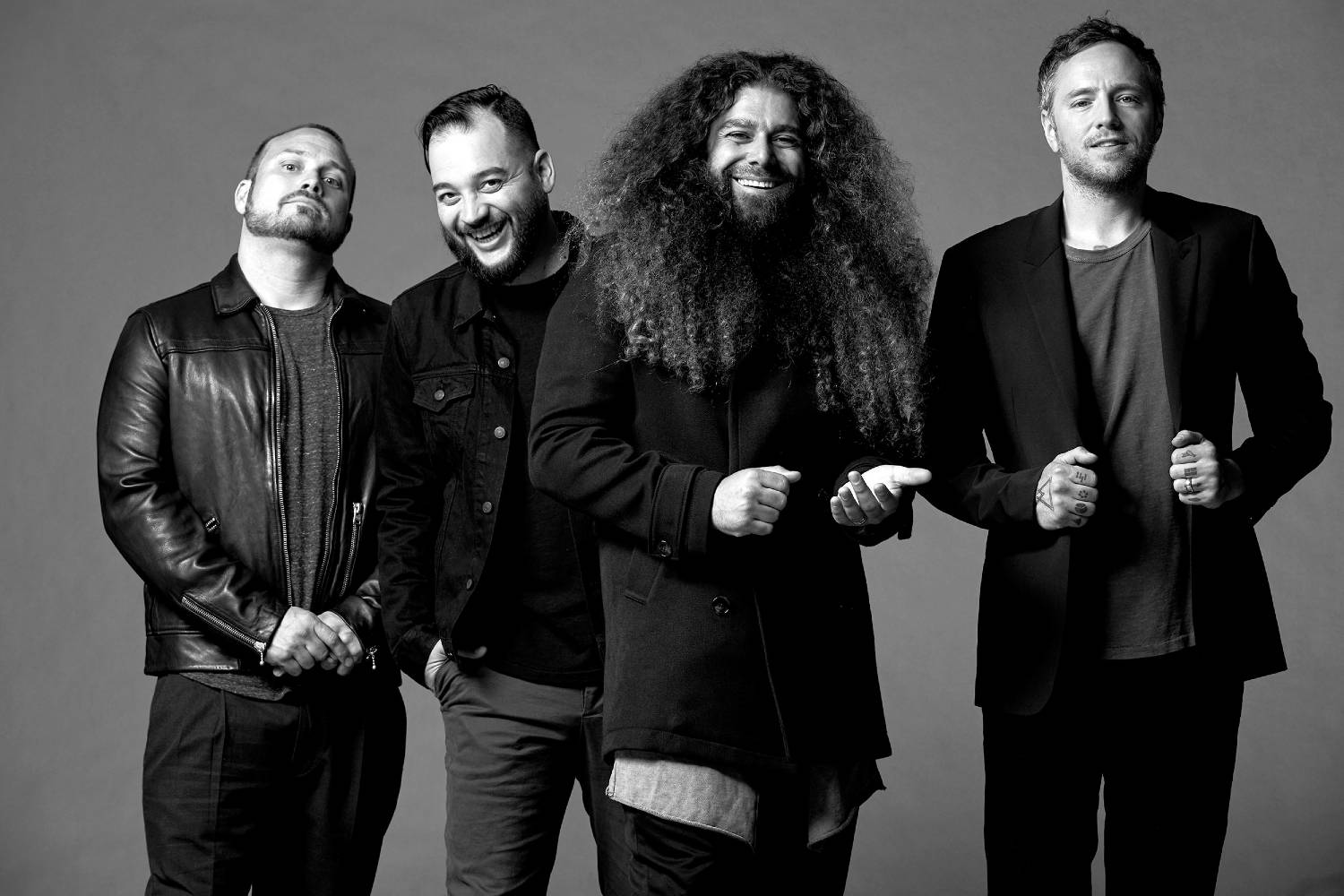 Coheed and Cambria: “Way More Than Just A Band Name”

Envision Rush and Yes having a guilty, lust-filled affair resulting in a bastard lovechild. The name of that child? Coheed and Cambria. A humble band from humble beginnings in Nyack, New York, they have created an international stir with a unique sound and story. Though the band usually stays true to their prearranged instruments, they will occasionally mix it up with eclectic pieces such as the mandolin or the lapsteel. Much like Saga and Queensrÿche, all of their CDs are concept albums telling a jigsawed story through scrambled album releases. The difference between Coheed and Cambria and these classic rock bands? Their raw lyrical content is unlike anything else.

When Claudio Sanchez opens his mouth, most people are shocked by the melodic voice that arises. What comes to mind is putting Cinderella’s voice in the Beast. (Yes, a Disney reference was just used). What shocks people even more, however, is the drive behind their lyrics. Each song on each album is a stepping-stone in a plot that they have created in this quasi-progressive rock opera entitled the Bag.Online.Adventures. They have currently released parts two, three, and four, with much anticipation awaiting the rest. The plot is so complex, that they have begun writing comic books, or graphic novels, if you will, to assist with the interpretation of their music. So, to assist those of you that cringe at the thoughts of comics, here is a break-down for you.

The tale is set in the backdrop of the distant past of our galaxy. Heaven’s Fence (aka the Fence) is a group of 78 planetary systems kept together via a visible (yes, visible) energy beam known as the Keywork. Not picturing it? Look at the band’s primary symbol consisting of a triangle and roughly sketched spheres. Need to see it? Look no further than www.coheedandcabria.com. Now that you have a visual, within this system, reside the Prise, humanity, and the Magi. Each have a job: the Prise watch over the Keywork, the Magi rule over the humans, and well…the humans just are. Okay, almost everyone has a job.

Alright, so are we all on track? Good. These Magi, well, they fight. A lot! But it was unheard of for one Mage to take over any other Magi’s turf. Until now. Ryan Wilhelm, he lost it, and took over two other territories, thus making him a Tri-Mage, and the most powerful of any. Much like any person with power, he wants more, so, when a young female Mage, Mariah, steps up to the plate, it’s on. He learns that she is gaining followers and poses a giant threat. Thus, Ryan’s right hand man, Mayo, plots to get rid of Mariah.

Okay, so that is the back story. A little complex, wouldn’t you say?

So… on to the more interesting stuff. Coheed Killgannon is one of the unknowing and naïve carrier of a dormant virus known as the “Monstar”. When activated, the Monstar allows its host to basically turn on and off the Keywork’s unifying energy, thus creating a bad time for everyone and namely, a whole lot of death. So, you’re asking yourself, “What?” Okay, well this will work for Mayo and his leading man, Ryan, because they want to just send it to Paris Earth, where Mariah resides in hopes that it will only destroy her and her followers.

Coheed is married to Cambria (aaaahhh….see it slowly coming together?) and they have four children. They are IRO-Bots, which are pretty much just human, except that they were made….and they have this virus. They are also 2/3 of the group known as the KBI: Knowledge (Cambria), Beast (Coheed) and Inferno (The Prize Fighter Inferno; Jesse, Coheed’s brother). The group’s purpose was to stop terrorist activity, BUT the creator was a terrorist himself, thus why he put the Monstar into Coheed and Cambria.

So, the government took no time in disbanding that little group, and wiped Coheed and Cambria’s memory. Mayo informs Coheed of all of this, and that Jesse is searching for him to activate the Monstar AND that he has passed an evolved form on to his children, the Sinstar, that is impossible to control. So, Coheed is convinced that he must kill his children. And he does, well he does a half ass-ed job and kills 3 out of 4 of them.

This is where the first CD, The Second Stage Turbine Blade, picks up. It begins with the song “Time Consumer”, and evokes despair and sorrow through Coheed’s words, “Me and my star Mathew goodnight. We know by law when we’ll be forgiven. Maria my stay Matthew goodnight. We know my lord when we’ll be forgiven.” While he plays with his children in the last minutes of their life. The CD goes on to explain the death of his oldest child, Josephine. She and her fiancé are attacked on the way home, so she is in a panic when she finally arrives. Cambria comforts her young daughter, but Coheed, wracked with guilt and fear kills her quickly with a, “…series of knocks to the young girls head side.” Mayo and his army then make an appearance and Coheed and Cambria learn that it was all a lie. A battle ensues, which results in Coheed and Cambria being taken to Paris Earth and eventually killed.

Claudio (yes, he wrote himself into the story) is the only child left. Ryan learns of this, and is shaking in his knickers. If Claudio learns to use his powers, he will be able to kick some serious ass, especially with the blood of his family on Ryan’s hands.

Their next CD, In Keeping Secrets of Silent Earth: 3, revolves around Claudio trying to come to terms with what has happened to his seemingly perfect life. Cast out by her fellow Prise, Ambellina has her wings burned and is forced to lead Claudio to Jesse. Claudio, on this quest, becomes a Messiah-figure known as The Crowing and learns that his not-so-evil Uncle Jesse is leading the fight against Ryan Wilhelm. We are also introduced to a series of new characters that include Al the Killer, who Claudio (the real one) describes as “a bizarre Hans Solo type character” is the psychopathic, racist captain of the spaceship, The Camper Verlourium who’s hobby is killing young white girls. Though he is, to say the least, demented, he is said to play a large role in the stories and assist the main characters greatly.

Their most recent CD, Good Apollo,I’m Burning Star IV Volume I: From Fear Through The Eyes of Madness focuses on the Claudio’s darker side. Not much has been said about this CD yet, but we do know that someone dies in the final song, “The Final Cut.” We also see that a number of songs have the name Apollo in the title, though the character of Apollo is a dog. There are a number of loose threads left in this CD with lots of clues and cliffhangers that keep fans desperately awaiting the final album.

Though in words this story may seem to some a bit bland, in song it is amazing. Claudio uses his voice both gracefully and harshly to describe each pivotal moment that occurs through the albums. His voice has also changed through the albums with suggestions that in the beginning he was meant to have puberty voice, but now that Claudio is aging, so must his voice and his demeanor. Everyone should check out www.evilinkcomics.net to see the comics. They really help explain the story and give the songs a whole new life.

Coheed and Cambria currently have a bonus CD out that includes their most recent CD, Good Apollo, I’m Burning Star IV Volume I: From Fear Through The Eyes of Madness, the first of a two part conclusion to the story, and a DVD that includes videos, behind the scenes and vignettes of comic pieces. For those of you that just can’t get enough of the sound, never mind the story, three of the four guys are either preparing or in the midst of side projects. Travis Stevers fans will be pleased to hear that he has released an EP under the guise of Fire Deuce. Josh Eppard decided to take a different route and jaunted into hip-hop; Weerd Science has released an album, Friends and Nervous Breakdowns, under Equal Vision Records. Those of you who are wetting your pants waiting to hear about Claudio, well you’re going to have to wait. He has decided to record as The Prize Fighter Inferno with My Brother’s Blood Machine slotted to come out sometime this year.