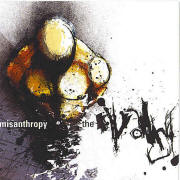 For a lot of readers reading this review, this will be the first time you will hear about quite possibly the most manic, brutal, chaotic and fierce-as-fuck band in the Australian metal/hardcore scene – The Rivalry. And let me tell you, for those reading this review and who take the time to check this band out, it will most definitely not be the last. Ok so who are The Rivalry you may ask yourself? The Rivalry are a six piece metal/hardcore ‘experience’ (I say ‘experience’ because seeing them live is just that – a fucking mind blowing attack of the senses) hailing from the city of churches Adelaide, Australia. The band has released their first record, an EP aptly named Misanthrope through Sightline Records. The band consists of two guitarists, bass, drums and two vocalists – that’s right two, and these boys play an experimental, unrelenting style of metal that boasts mature musicianship as they glide in an out of just about every style of metal imaginable in six songs that they themselves describe as “aural rape.”

First song, “Embarras De Choix” thunders in with authority, with the band teasing the listener with some chaotic scales, some absolutely brutal drums fills, and some painfully high pitch screams, all swirling around each other until second vocalist Jamie comes in and kicks your fuckin’ ass all over town with some of the deepest, guttural vocal growls I have heard. The riff under the verse is fuckin brutastic, squealing, and shredding with a slight dash of Dimebag inspired chugging. When the two vocals combine, its fuckin’ insane. It’s almost like they are both singing different songs to the same music, but it gels in a way that gives The Rivalry an almost schizophrenic sound. Half way though the first track it’s hard to believe that I’m only two minutes into the EP, this band chops it up brilliantly, with the best yet to come. The song builds into a sickening, twisted lead riff that would fit perfectly in any horror flick, seriously setting a dark mood. It’s by this point that I close my eyes and drift away at the sheer awesomeness of the musicianship, and thank god that there is a band that is truly trying to create their own, ORIGINAL (YAY) signature sound.

Track 2 “Morass Opus” begins with some fucked up whispers, jazzy rock beats, some awesome bass slides, and once again, the overlapping vocals which are intoxicating – they take turns, sing over each other, you really have to hear this to believe it. The music is so tortured, lyrically describing the stages of catching fire, with the music painfully painting the picture with some seriously heavy grooves. You can feel the chaos building in this song, then no shit there is the biggest, deathliest growl EVER that goes for around 5 seconds. This song is fucking twisted! Then just when you think you have figured it out it swerves into another direction, showcasing a kick-ass solo, and some fuckin’ brutal breakdowns. Now don’t be dismayed and think, “oh no, not ANOTHER BREAK DOWN” because 95% of bands could never write a breakdown like these dudes – fucked-up time signatures, little changes here and there, vocals attacking your ears, drums that drift from metal to jazz style rhythms all played with a fluency that is remarkable. This is a fucking joy to listen to, this music scares me and I can’t even imagine what’s inside the remaining tracks.

Third song, “Cancel the Cheque, Things Have Taken an Unexpected Turn for the Worse…”, is like quick sex; short, sharp and to the point, and oh so good! Opening up with some deathly blasts and some awesome vocals, it chugs away at the senses. At this point I’m doing my best air drums, then out of nowhere comes the biggest, ugly, fuck-off, blatantly stoner rock riff that had me grinning from ear to ear; it’s nothing short of fucking metal excellence, with The Rivalry stating that if you’re into any kind of metal at all, there is something here to please anyone. (This song seriously was repeated about 15 times before I realized there’s another two songs to go!)

The second half of “Misanthropy” only gets more experimental, chaotic, and generally fucked up!Guitarist Jesse has really written some fuckin’ genius riffs on this EP; almost groundbreaking. Although the Rivalry are obviously influenced by bands such as the Dillenger Escape Plan, Between The Buried among others, they seem to engage the listener as soon as each song begins right to its conclusion, giving them a fluency that is unparalleled in their genre. In fact, to categorize this band would be as blasphemous as calling Mr. Bungle “experimental” – they seem to be able to pull-off any style they attempt.

Misanthrope closes with its epic “The Vampyres of Al-Kulab”, a 9:14 song that is so fucking amazing it’s hard to believe this is only the band’s second recording. The time changes, jazz fusion influenced riffs, mind bending vocals, and the sheer heaviness of this track cements The Rivalry as headline act in any city of the world. I could have seriously written a whole review on this one track alone. One minute it sounds hardcore, next second there are metal riffs that borrow ideas from classic metal ala Maiden/Metallica, then all of the sudden for the first time in 20 minutes of carnage it slows down to a almost soothing conclusion to an excellent EP. Here guitarist Jesse’s melodical vocals are simply breathtaking, his bluesy tones capturing my total attention, almost teasing the audience as the band unleashes the brutality for one last time with a sound that quite possibly is “aural rape.”

In conclusion all I can really say is get this fucking EP! If you don’t then your missing out; it’s seriously as good as anything you would have in your collection. It will make you air guitar, it will disturb, and more importantly it will be cranked through speakers for a long time to come. This band is truly world class, INNOVATIVE, and artistic in the sense that they will attack your emotions like a punch to the face. BRING ON THE FULL LENGTH ALBUM! 10/10 BRILLIANT!  [ END ]

01. Embarras De Choix
02. Morass Opus
03. Cancel The Cheque, Things Have Taken An Unexpected Turn For The Worse…
04. Misanthropy
05. The Vampyres Of Al-Kulab