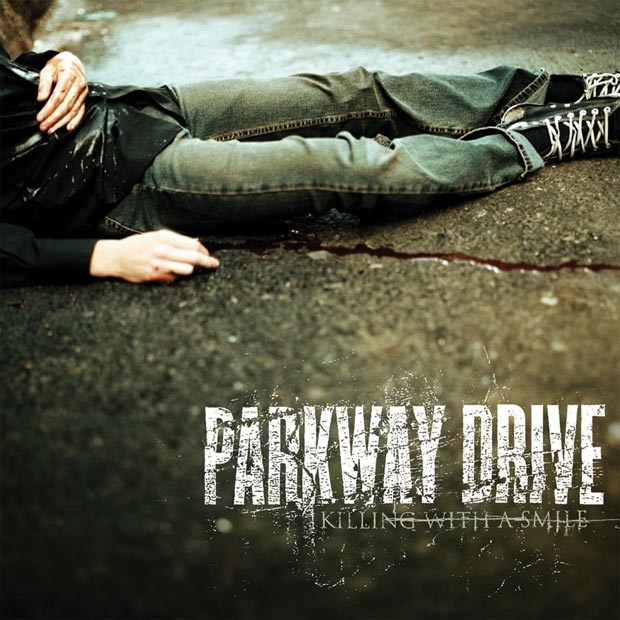 Parkway Drive – “Killing With A Smile”

On the surface, Australia’s Parkway Drive could be easily dismissed as yet another band on the Metalcore bandwagon. They have all the required ingredients; throaty vocals, Swedish riffs, blast beats, breakdowns… you get the idea. But the thing that separates Parkway Drive from the rest of the pack is the passion, aggression, and pure intensity that oozes through the speakers from the moment Killing With a Smile begins. From start to finish, the disc’s production is amazing, and so it should be for with renowned Metal producer (and Killswitch Engage axeman) Adam Dutkiewicz taking up the reigns, every song gets the brutality it deserves. It’s clear from the onset that this band and its producer take their respective crafts very seriously.

The opening track “Gimme A D” thunders in with a ferocity that instantly demands respect, and shows why this group has graced the stage with acts such as Hatebreed, Chimaira, and In Flames to name a few. The opening riffs are world class, the black metal screams combined with the demonic lower growls seem to flow effortlessly throughout the song, leading up to a breakdown that will leave cracks in the earth. Track 4, “Romance Is Dead” is, how can I say it… fucking awesome! Beginning with thrash style shredding accompanied with some deathly roars, the sheer heaviness and anger in this song is devastating. Although this is clearly a song based around heartbreak, it is DEFINITELY not a whiny Emo song. This is most evident in the middle of the song when vocalist Winston Mcall announces “CRY ME A FUCKING RIVER, BITCH” followed by yet another jaw shattering breakdown.

Another of the album’s highlight, track five aptly named “Guns for Show, Knives for a Pro”, uses some damn fine ear candy to paint the initial picture. Using the famed dialogue from the Die Hard movie series; “yippee kayee motherfucker” as a build up for some of the most hard hitting music EVER put to tape, the track itself builds on its awesome well-known introduction to deliver a slow, ugly, heavy as fuck knock out blow. And just when you think the song is over, it unrelentingly shifts down a gear; leaving my tongue on the floor with horns held high in the air.

By this stage of the CD I am worried. With so much awesomeness already jammed into five tracks; with the catchy “CRY ME A FUCKING RIVER, BITCH” and the “yipee kayee motherfucker” already stamped in my head, I am convinced that the band has shown all their cards. In a way they have, but it really doesn’t matter for Parkway Drive do what they do so well. The pure rage in this release just doesn’t stop, if anything the songs in the second half of the album continue to build on their style. The precision in the playing is immaculate, the drums fills and blasts are simply outstanding (would Adam D accept anything less?!), and the breakdowns (although definitely not ground-breaking or innovative) are so fucking huge that even the Metal elitists could NOT dismiss this as ANOTHER Metalcore wannabee. The final tracks “Smoke ‘em If Ya Got ‘em” and “A Cold Day in Hell” show a definite Gothenburg-influenced sound. The spoken vocals are a little too Unearth-inspired, but rest assured, when Winston opens his lungs properly, all thought of Unearth is lost.

In summary, Killing With a Smile is not revolutionary, there are ten zillion bands all over the world playing this style; but playing it this good? No fucking way! The aggression, the passion, the anger, the music, and its HUGE sound make this album a must have. More importantly, given the calibre of the producer and the recording, Killing With A Smile will FINALLY give international audiences a taste of the kick-ass Metal that is coming from down under.  [ END ]