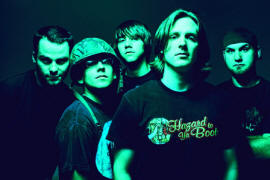 Right from the mid-west of the United States, St. Louis punk/pop five piece Ludo has recently began to cause quite a stir in the punk rock world. The band has been hitting all corners of the mid-west lately in support of their latest release Broken Bride which comes two years after the band’s self-titled debut and major mainstream success seems imminent for the band. Recently, PGA was able to catch up with the band and ask them a few questions about the new disc, touring, and how the band likes to celebrate Christmas.

How exactly did Ludo form and in what year?
Tim: Tim Ferrell (guitar) and Andrew Volpe (vocals) met while they were both in college and started playing and writing songs together. They did it for fun when they were home on breaks, but when they finished school they hit the road in a Camry and played acoustic shows all over the country. In the Spring of 2003 they recruited Tim Convy to play the Moog, and the three spent the summer searching for a rhythm section. Marshall Fanciullo was added on bass and Matt Palermo on drums. The self-titled record came out in August of 2003 and the band played their first show that month.

To say the least, you guys definitely have some quirky and original lyrics in your music. Where do you guys come up with the inspiration for your idiosyncratic lyrics and does Andrew write all of the lyrics to all of the songs?
Tim: Tim Ferrell writes some songs as well. A lot of it comes from pop-culture stuff and…you know, life.

The band of course just recently released its new disc Broken Bride at the beginning of October. How would you say the new disc differs (if at all) in sound from your 2003 self-titled debut?
Tim: Broken Bride is way more ambitious. It’s a rock opera first of all, that tells a story from beginning to end, so that’s a big difference. Musically, there’s just more going on. We really tried to tell the story w/ the music as well as the lyrics and it makes for a different sound for us. But what I do think the two albums have on common is the story-telling and the sense of adventure. Both are supposed to leave you somewhere different that where you were when it began.

You guys have been touring like crazy all over the mid-West of the United States lately. What has the crowd reaction been like to the new songs off of Broken Bride? Do you have any plans to make it up to Canada to do any touring in the future?
Tim: We didn’t know what to expect when we started playing the Broken Bride stuff live, But the reaction has been remarkable. The record had been barely been out and crowd were singing ever word – it really validated what a lot of people told us was a huge risk. As far as Canada – we’d love to, but these gas prices are killing us!

The band of course did some dates on the summer 2004 edition of the Vans Warped Tour. What was it like being on such a massive and hugely popular touring festival? Were those shows the biggest crowds you’ve ever played to?
Tim: We were actually recording Broken Bride this past summer, so we just played the St. Louis stop. It’s always a good time, and great to be reunited with bands we’ve toured with throughout the year.

It’s a well known fact that Ludo was the winner of Fuse TV’s “Next Big Thing Award” last November, following in the footsteps of bands such as Modest Mouse and Yellowcard who have gone onto major mainstream success. Could you maybe let is in on how you were nominated for the award and what other bands you beat out for it?
Tim: Through a contest we won through Fuse, we made a video for a song of ours called “Hum Along.” They entered the video in the Next Big Thing Awards, and viewers voted for who they thought would be the Next Big Thing. We beat out bands like The Libertines, Breaking Benjamin, and Underoath.

The band seems to have something of a tradition forming with the recent announcement of this year’s edition of “A Very Ludo Christmas” taking place December 9th in St. Louis. How, if at all, does this show differ at all from a regular gig that the band plays? Is this going to be a yearly thing that the band does from now on?
Tim: This only our second year, but I think we’re pretty committed to keeping it going. Last time it was just a real special night – bands that we loved, Christmas songs, ridiculous outfits, and the stage was covered with trees, presents, holly, poinsettias, and animatronic angels for good measure. This year, if we pull off half of what we’ve been talking about it should be quite a spectacle.

You guys have an ambitious and rapidly growing street team called “The Ludo Ninjas” that helps with promoting the band across the United States. How and when exactly did this project get off the ground?
Tim: I am not at liberty to discuss the goings-on of the Ludo ninjas. They’re watching.

Since you guys do so much touring, you’re bound to encounter a ton of up and coming cool bands that a lot of people might not have heard of yet. What bands out there have caught your attention that we might not yet be too familiar with?
Tim: Glad you asked.

It seems like the present is going quite well for Ludo. What does the immediate future hold for the band and where do you see this band maybe five years from now?
Tim: The immediate future holds lots of touring for Broken Bride and continuing to write songs for a new record. I think a goal of ours is to always get better – be better songwriters, better musicians, and better performers. As long as we’re getting better, we know this thing will grow and we want to get Ludo to as many as people as possible.  [ END ]