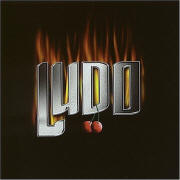 Remember all of those punk/pop sounding bands that began to surface like mad after Blink 182 started to make a name for themselves towards the end of 1999? There was of course Simple Plan, Sum 41 and Yellowcard among others, but a band that would definitely fall into this genre that you might not know about is the St. Louis punk/pop five piece Ludo. The band has been around for a few years now and has successfully formed a strong following in the mid-west of the United States. And while the band’s eleven track self-titled disc is certainly nothing too original in sound, it does show that the band is capable of writing some catchy tunes.

The disc begins with perhaps the best song of all the eleven tracks, “Saturday Night Thunderbolt.” Immediately, the listener gets a taste of lead singer Andrew Volpe’s light hearted and sometimes silly vocals, but the song has a very catchy hook and chorus. Track two “Roxy” sounds a bit like vintage Green Day and is at times very cool, but it starts and stops a bit too much which ruins the flow of the song a little bit. I didn’t care much for track three “Hum Along” as the song just doesn’t flow all that well. Perhaps the silliest lyrics of the album come on the next song “An Ode to Kevin Arnold,” but despite this, the band shows yet again that they can write a nice chorus. The first taste we get of a slower song comes next on “Sara’s Song,” a decent ballady type track with more silly lyrics about “ewoks on TV.” Track six “Summertime” has a strange arrangement to it with a lot of starting and stopping and it just doesn’t flow very well.

The second half of the disc starts off with “Hello, My Name Is Your TV,” and despite its quirky title, it’s one of the better songs on the album. The song features some of Volpe’s best vocals and some more catchy melodies. “Good Will Hunting By Myself” seems to be something of a song parody about the movie Good Will Hunting and despite a silly spoken word part about halfway through the song, the track is one of the faster paced numbers on the disc and displays some of the album’s coolest instrumentation. Even though I have no idea where the inspiration came for the lyrics to “Laundry Girl,” the song proves yet again that Ludo can really write some good hooks and melodies. “Air-Conditioned Love” has a very cool electronic sounding guitar solow and the track shows some more solid musicianship from the band. The solo actually reminded me a bit of one of Rage/Audioslave guitarist Tom Morello’s crazy and original solos. The final song “Girls on Trampolines” is a typical pop/punk tune, but it’s not quite up to par with the better songs on the album.

Overall, Ludo’s self-titled disc is a decent collection of light hearted, pop/punk tunes. Some of the songs get a little bit too silly with the lyrics, but there are several impressive and catchy hooks and choruses throughout the album. The band definitely has a marketable and appealing sound that a lot of fans of pop/punk type music would really enjoy. And while Ludo’s sound definitely isn’t for everyone, if you’re a fan of bands such as Simple Plan, it’s quite likely that you’ll find Ludo’s music to be quite pleasing to the ears.  [ END ]