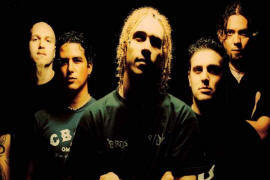 It was certainly sad news when 40 Below Summer announced that they would be disbanding, nevertheless any feelings of suicide and depression were almost immediately quelled when news came that the group’s remaining members would be continuing to pursue careers in music and subsequently forming a new band. Frontman Max Illidge, guitarist Joe D’Amico and bassist Hector Graziani, have teamed up with guitarist Ryan Jurhs (formerly of Flaw) and drummer Ali Nassar to form Black Market Hero. Those of you you are familiar with 40 Below’s work will most likely enjoy the transition to BMS. Here is what bassist Hector Graziani had to say about this crazy transition.

Who are you, what band are you in, and what do you do in the band?
Hector: My name is Hector and I play bass. I was in a band called 40 Below Summer. Now I’m in a new band with Max and Joey form 40 Below Summer and Ryan and Micah from ‘law… and I’m from Puerto Rico.

Is it true? Did 40 Below Summer break up?
Hector: Yes we did. All for good reasons… sad but true.

When can we expect some material from the new band?
Hector: In the next couple of months.

Are any of the new 40 Below Summer songs “Hatemail”, “How Long”, or “Replapse” going to make it on to the new band’s CD?
Hector: Yes they will.

I had the privilege of seeing 40 Below Summer live when you came to Canada to play with No Assembly Required. I must say, that was the best show I’ve ever seen live. Will the new band and line-up have the same energy live that 40 Below Summer had?
Hector: Let’s just say that the energy with 40 below was awesome but the one we got going on right now is amazing!!

How much different will the new music be from 40 Below Summer?
Hector: Can’t tell… you tell me.

Out of your whole career in 40 Below Summer, what would you say the highest point you’ve ever had as a band was?
Hector: Everything… getting a deal, making a record, touring, meeting fans, making new fans, hanging out on the road with fans and other bands, playing live… EVERYTHING!!!!

Who do you think is the worst new band out these days and why?
Hector: No Assembly Required!!!… NOOOO Just kidding!!!!!!! I can’t tell, but I’ll tell you that I hate Ashlee Simpson.

Can you run down your current Bass rig?
Hector: Music Man bass / Ampeg amp and speakers.

Name some other underground bands you think people should check out.
Hector: My mom’s trash band.