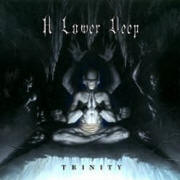 I first have to say that until recently I had never heard of A Lower Deep. How I missed these guys is beyond me. They are awesome musicians as well as song writers.

Trinity, A Lower Deep’s second full length is chocked full of brutally melodic guitar riffs and machine gun drums courtesy of David Lee from Scorned Destiny. From the first track to the last this album takes you on a journey of unimaginable depth and feeling. You don’t listen to this album you become this album.

The first track “Ascent of the Fallen” starts of with thunderous strings that instill a most ominous feeling of being the one fallen. With the vocal power of Billy Mullican and the power of the musical ability of Tim Umstead and Troy Reid, you feel the crescendo building and building until, like the phoenix rises from the ashes you are taken to heights beyond your wildest imagination.

We then find ourselves taken to yet another place, this one a place of pain and loss, with the song “A Grief Observed”. This song does a job of describing the loss of a daughter that is almost too real. I have to also give a huge amount of credit to Melea for her vocals that let you know that even though some may be gone they are still with you in your heart you just have to look inward to find them.

“Sisyphus Resigned” yet another brilliant piece of musical mastery. Billy’s vocals are reminiscent of Geoff Tate of Queensryche fame. Between the lyrics and the music you can feel the struggle that this song intends to get across.

With songs like “Gods and Monsters”, “Lost in Eden” and “Out of the Darkness”, you can really feel the power and versatility of this band. Both musically and lyrically. These tracks flow through each other as though they were written for that purpose. This is continued with the remaining tracks “Minds Eye View”, “My Enemy’s Enemy”, “Numinous” and the final track “The Power of Why”.

Final thoughts of this album… I am nowhere near done thinking of this album. This album is one that will remain in permanent rotation with me. The flow of this album is so incredibly smooth it almost seems unreal. I don’t know if when they sat down to write this album they planned out the flow and feel of the entire album but, they achieved an album that from start to finish is engulfing and instills feeling like very few albums can. I see why they were the 2005 newcomer of the year. I look forward ti hearing more from these guys and I am going to pick up their last album as well.

Keep your ears open for A Lower Deep. You will hear more from these guys, I guarantee you that.  [ END ]
* note: J.D. Franklin founded and runs http://www.bhamrevolution.com a top resource for unsigned talent in the US.