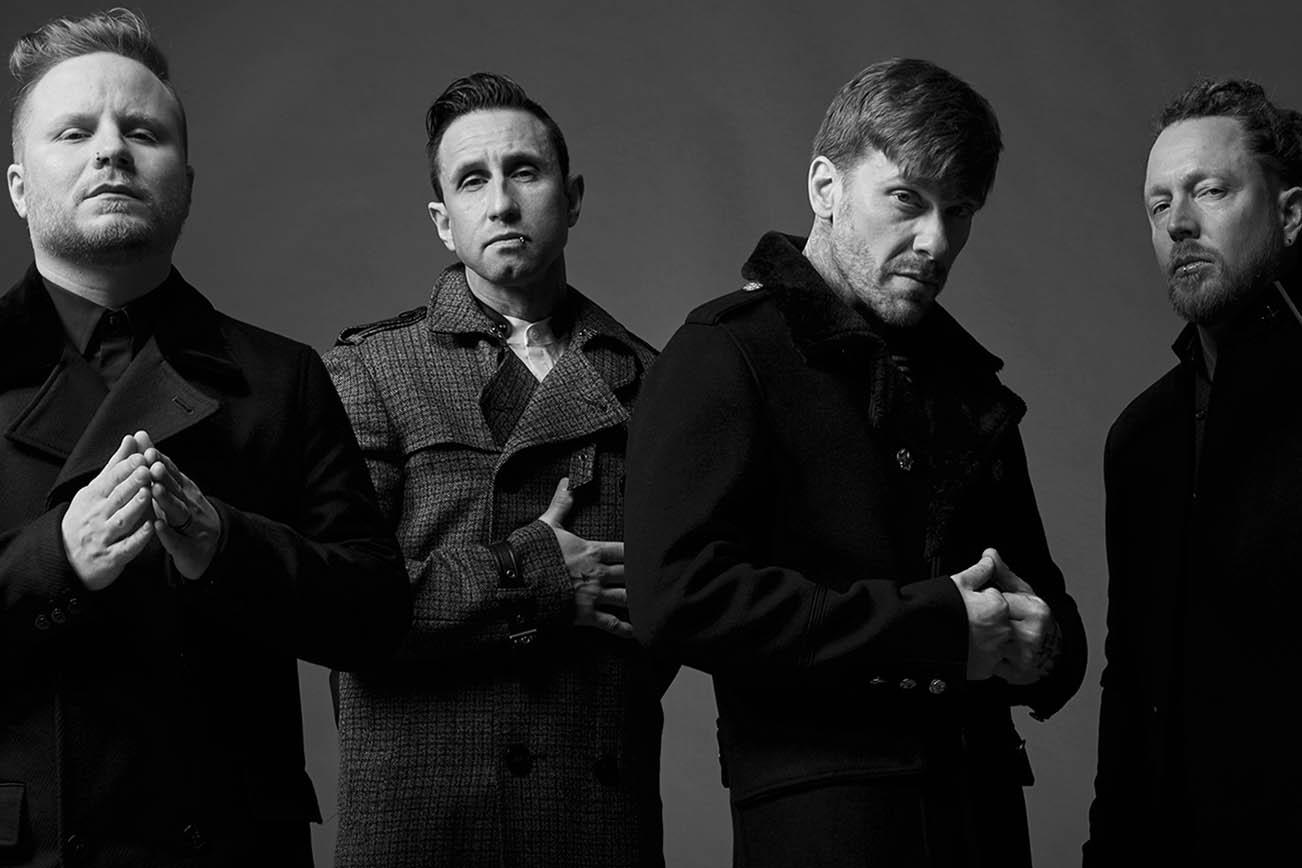 Recently, Chris Gonda had a chance to sit down with Shinedown’s bassist, Brad Stewart, and drummer, Barry Kerch. They talked about the origin of the band, getting signed, the new album and their many influences. Check it out!

Had you guys all known each other for a long time when Shinedown formed, or were some of your relationships still fresh?
Brad: Fresh as a baby’s ass. We had just met and had become fast friends and ultimately “brothers.” We definitely get along like brothers and try to keep each others egos in check.

Have you all always wanted to be musicians and how did music come to be such important parts of your lives?
Brad: I have played the guitar since I was 12 years old and have always loved music. Each member of this band has been playing their whole lives and really don’t want to do anyone thing else but play music.

How did your band name come about and furthermore, what does it stand for?
Brad: The name of the band came from a painting in my house. We were looking to name the band and Brent looked at the painting and said it would be cool if there was a light shining down on the painting. I came in the next day and suggested “shining down” for a band name. He shortened it to SHINEDOWN and it stuck. It sort of took on the meaning of the yin and yang of the band’s music. Sometimes you shine and sometimes you’re down.

You guys obviously quickly found your stride and in no time record labels were taking notice of your awesome music. What do you think it was that helped lead to your rapid success?
Brad: Hard work, dedication and a lot of luck. Timing is important too. I think making sure that you have great songs that people can relate to also helps.

In early 2002 you landed a deal with record label giants Atlantic Records. What was it like signing a contract with such a huge label and what was it that made you decide to go with Atlantic?
Brad: The history of the label sold us on Atlantic. Legendary acts like AC/DC, Led Zeppelin, Otis Redding were all on Atlantic. They aren’t just a fly by night company, they have a legacy and we wanted to be a part of that legacy.

Your debut album has faired tremendously thus far and seems to continue to sell very well. Are you pleased with how it has done so far and if you could, would you have wanted to do anything differently with that album?
Brad: The first record was a slow build but it made us really appreciate every break that we ended up getting. I think everything that happened first time out happened for a reason so I wouldn’t change a thing.

Your debut album is titled “Leave a Whisper.” How did you come to name it and what does it stand for?
Brad: I don’t really know, maybe you should ask Brent. Actually I don’t even think he knows….wait a minute.

Throughout the songs on “Leave a Whisper,” there seems to be a recurring theme of persevering and hanging on in the face of adversity, most notably on the song “45.” Are adversity and hard times something you guys have had to endure a lot of in your own personal lives?
Barry: Of course, but who hasn’t? It is a universal feeling……..(Barry Has taken over answering all of these questions.)

In recording your first album, you guys were able to hook up with producer Bob Marlette (Black Sabbath, Ozzy Osbourne, and Saliva). How did this union happen and did you enjoy it?
Barry: Bob was good for us and very patient. We picked him after he showed interest in the project.

What assets do you think Marlette brought to the table in the process of writing and recording “Leave a Whisper?”
Barry: His patience and laid back attitude helped the most. He also knows how to pick a great restaurant.

Is it a coincidence that both Shinedown and Saliva are managed by In De Goot Entertainment and had Marlette’s help in producing both groups’ work?
Barry: Yes it is a coincidence, but then again Bill McGathy is a fucking God so who wouldn’t want to work with him.

Speaking of working with Marlette, did you guys learn a lot from the experience? Did he offer any advice to you that he might have picked up himself from having worked with Ozzy and/or Black Sabbath?
Barry: Not really, he didn’t talk much about his time with Ozzy.

Growing up, were either Ozzy or Black Sabbath favorites musicians of yours? And if so, what kind of a mind-blowing feeling was it to have worked with the man that produced the music of some of your childhood rock heroes?
Barry: Business is business. We love Ozzy and Black Sabbath, but in the end we are in this to help ourselves succeed.

Florida, and even Jacksonville itself, has already had its fair share of rock music success stories such as Lynyrd Skynyrd and Limp Bizkit. How does it feel to be climbing the same ladder that so many greats have already done?
Barry: It is an honor to be in such great company.

Speaking of Skynyrd, there seems to be somewhat of a southern rock feeling to both your music as well as some of Brent’s vocals. In writing your music, do you aim for a southern feel at all or is it something that just might happen to seep into your music because of your musical upbringing?
Barry: We just happen to be southern boys, so it comes out in our music unintentionally.

You guys recently recorded a cover of the Queen song “Tie Your Mother Down” for a Queen tribute album. How did this project come about and is anyone in the band a big fan of Queen?
Barry: Hollywood records approached us about it. We love Queen and they were great songwriters.

Although totally unlike your sound, is Queen one of the types of bands whose music and/or past you might draw inspiration from?
Barry: See Above

Shinedown is scheduled to release its sophomore album, “Us and Them” sometime in October. How does the new album differ from “Leave a Whisper?” What can all of your fans expect in terms of sound? And having already released an album, this time around what was the whole recording experience like for you guys?
Barry: I think we really matured on this record and the songs have become much better. The sound is a little more stripped down and pure rock. The recording experience this time was like pulling teeth. We were under tons of pressure and only had 6 months to turn around the record. The old adage is you have a lifetime to make your first record and a couple weeks for your second. Take it easy….