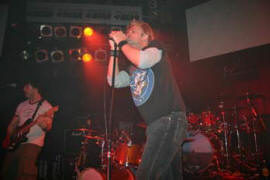 Hurst: “Wanderlusting to the Top”

If you’ve been a fan of Canadian new rock over the last ten years then you are bound to remember the band Econoline Crush. The Vancouver based band formed in the early 1990s in Seattle, Washington when the eventual lead singer Trevor Hurst answered an ad for a new band in a local newspaper. After the band formed, Hurst and his four bandmates uprooted and moved to Vancouver where they began a successful career, lasting nearly ten years and four albums. Unfortunately, Econoline Crush parted ways in 2002 after a very successful run that saw the band sell tons of albums, play to thousands of people and receive much critical acclaim for their guitar rock/electronic driven sound.

Despite the fact that Econoline Crush sadly disintegrated, every end brings about a new beginning. Enter Hurst, the aptly named new band led by none other than Trevor Hurst. Soon after the breakup of Econoline Crush, Trevor began working on a new project with none other than Ross Childress, former guitarist for ‘90s rock band Collective Soul. The two men first met in, of all places, Cleveland, Ohio where Econoline Crush was doing a special, one night only opening set for Collective Soul. Trevor became very impressed with Childress’ musical abilities after watching him wail away on his guitar during sound check. Years passed until one day Trevor, while in Nashville, Tennessee, decided to phone Childress up at his home in Atlanta, Georgia. The two decided to meet up in Nashville to experiment and work together on some new song writing. Fortunately for the two musicians, they soon discovered that they had great chemistry working together, as they punched out an incredible five songs in only one day. This one amazing day of songwriting set the foundation for the creation of the new band Hurst and their debut release Wanderlust.

Even though Hurst is fronted by Trevor on main vocals just as Econoline Crush was, the similarities between the two bands pretty much end there. While Econoline Crush was a great practitioner of the use of electronic sequencers and samplers in its music, you won’t find any evidence of such devices used on Hurst’s debut release. With Hurst, Trevor has aimed for a more stripped down, guitar driven, organic approach that has saw the singer rediscover his guitar rock roots. The songwriting process now entails sitting down and writing with the use of acoustic guitars and piano instead of experimenting with loops and samples. The collection of songs that became Wanderlust was actually written all over North America, from Vancouver to Toronto to Atlanta among other locations.

What is most amazing about the new band and their debut EP is that they have taken the tried, tested and true phenomenon of guitar rock and made it sound new, fresh and innovative. The seven song collection shows great diversity, with hard driving rock songs such as “Tin Cup” and “Going Under,” mid tempo, radio friendly songs such as “Not Broken” and Clear Blue” and slower acoustic numbers like “Stumble,” “Just No Good,” and “Surrender.” And despite the fact that Childress co-wrote, co-produced and played most of the instruments on Wanderlust, he is technically only a silent partner in the band. Trevor has assembled his own live band that besides him includes guitarist Derrick Gottfried, bassist Paulo Neta and drummer Nik Pesut. As a live act, Hurst is still in its infancy stages, but the band has so far received rave reviews playing as an opening act recently for a Theory of a Deadman tour this past July. The band just started another short tour, this time opening for former Big Wreck leader Ian Thornley’s new band Thornley that will see them criss-cross their way around Ontario for the rest of the month.

Overall, the future looks extremely bright for Trevor Hurst and his new band. Their unique blend of guitar driven rock is just starting to catch on within the new rock mainstream and it is likely only a matter of time before the band becomes a household name. It’s been a long time since there was a great new and exciting Canadian rock band to surface, but it seems that such a band has come along at the very right time.  [ END ]