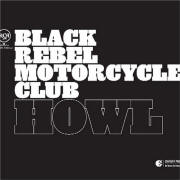 Black Rebel Motorcycle Club are not liars. You know how a lot of bands claim their new album breaks artistic ground (in the sense that they’ve never done anything like it before), and all you end up hearing is the same regurgitated sound that their previous work had? This does not, I repeat not, apply to these guys. Before Howl, I fashioned a pseudo sub-genre called ‘vampire rock’ for them; 2001’s B.R.M.C. and 2003’s Take Them On, On Your Own had a gorgeously blurry, psychedelic, distorted feel and, seeing as the three band members dress in head-to-toe black and look as though they could all do with a decent meal or two, this label seemed exceptionally fitting. Now, with the release of Howl, I’m thinking that it’s not very applicable anymore. Gone is the feedback-driven, atmospheric, semi-shoegazer rock sound we’ve come to know and love. But this album brings something more original, more grounded and, quite possibly, more beautiful than their ‘vampire rock’ ever did.

What’s immediately noticeable is that the music here is stripped down and cleaned up. The album opener, ‘Shuffle Your Feet’, features nothing more than a terrifically arranged vocal harmony for the first 20 seconds…and when it actually kicks off and turns into a full-fledged rocker, it’s a bit folksy, a tad bluesy, and wholeheartedly determined to make you want to, fittingly enough, shuffle your feet! ‘Ain’t No Easy Way’, Howl’s first single, is another tune of this sort. On this one we catch Black Rebel Motorcycle Club playing with a rockabilly strut. There’s a little bit of classic BRMC grit thrown in there mind you, but it’s also just as, if not more, boot-tappin’ fun as the aforementioned song.

Even only a few songs into Howl, it’s not at all difficult to recognize that the sheer quality of this album is miles above its predecessors. On ‘Devil’s Waitin’’, a spectacular jailbird-like ballad, the vocals are make-the-hairs-stand-up-on-the-back-of-your-neck good. Of course there’s generally a stigma surrounding rock n’ roll singers, being that their voices are not of a necessarily high caliber…yet with the performances on songs like ‘Fault Line’, ‘Gospel Song’ and ‘Restless Sinner’, Peter Hayes and Robert Levon Been give most ‘singers’ singers’ a run for their money.

Switching from electric to acoustic guitars and harmonicas instead of reverb pedals has also brought the band’s songwriting prowess to the forefront of things, and what a great thing this has turned out to be. ‘Weight of the World’ is total perfection and, though atmospherically it’s probably the closest they come to sounding like the BRMC of old, lyrically and melodically it’s so far superior it’s actually slightly ridiculous. The title track, ‘Howl’ (a reference to the epic poem by American beat poet Allen Ginsberg), has dusty verses that creep along and a chorus that soars, making it one of the album’s many, many highpoints.

Black Rebel Motorcycle Club are saving a spirit that’s been missing in music for a long while, though I can’t actually pinpoint what it is they’re doing so right and (almost) everyone else is doing so wrong. They’re like the Clint Eastwood of music. Or maybe James Dean, I’m not quite sure. Either way, it’s excellent in a challenging, raucous, don’t-give-a-fuck kind of way. Their influences (which range from ‘Country Honk’-era Rolling Stones to Sam Cooke gospel) are evident all over the place, but don’t actually dictate the album. Instead, Black Rebel Motorcycle Club have created their own sound and produced something astonishingly creative, intelligent, and fun in the process. As they say in ‘Shuffle Your Feet’, time won’t save our souls, but Howl just might do such a thing for music lovers everywhere. As far as I’m concerned, it’s the absolute best album of 2005 thus far, no question.  [ END ]