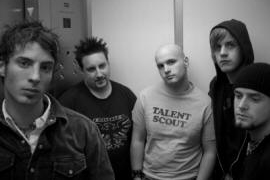 Unbeknownst to many people, one of the hottest and fastest rising new rock acts in Canada is a five piece band by the name of Tupelo Honey. Unfortunately however, at the moment there does not appear to exist a whole lot of information about this particular group. Accordingly, we here at PGA feel that it is our duty to compile what we have thus far researched and present you with an excellent, amalgamated Tupelo Honey resource.

Just like a giant bee’s nest dripping with sweet oozing honey, this band’s music is rich, tasty, and very much abuzz. The group is comprised of five members in total; Matthew Landry (vocals), Steve Vincent (bass), Daniel Davidson, Tyler Dianocky (guitars), and Greg Williamson (drums), each of whom has in the past undergone serious musical schooling. Evidently this previous training, in combination with their collective go-get-‘em attitude, awesome music, and energetic stage presence is what has aided the band in achieving such rapid acclaim.

Having formed as recently as February of 2003, it is rather incredible that within months, the group was already playing sell-out shows in their hometown of Edmonton, Alberta. Bearing in mind, that at this point in their career, Tupelo Honey had not yet recorded any songs of their own, the fact that they had even begun opening for numerous prominent Canadian groups is all the more impressive.

This incredible amount of stage time, backed by the fact that Tupelo Honey’s live show is in fact highly captivating, was certainly one of the main reasons for the band’s initial growth and interest. Within less than a year of having begun playing live gigs, the group had already literally headlined at every major rock venue in Edmonton. Needless to say, their fan base was blossoming (a feat which generally takes bands eons by comparison) and within one short year the group had already made one hell of a name for themselves.

After what proved to be an extremely busy and productive first year (and surely realizing that they had something great going), Tupelo Honey finally ventured into a recording studio in order to get to work on their debut disc. Within no time at all, the group had begun preparing material for their first-ever release; a move which would prove necessary in order to maintain the momentum of their already increasing popularity. By the time the last production touches were finalized and the disc was pressed and ready for release, it was late 2004. Nevertheless, Tupelo Honey’s highly anticipated debut self-titled EP went on sale and has been faring well ever since. The EP features six highly addictive songs, each unique yet similar. The album opener, “Why I Bother”, is especially good and shortly after its release, became the group’s first solid single. Receiving repeated radio play on a couple of stations in Alberta, it did not take too long for the song (and Tupelo Honey’s fan-following) to begin spreading around the area.

As the group’s music became increasingly popular they began playing more varied shows around the country. Travelling more and receiving more prominent press, they also began working on their first ever music video. Now, with the newly-released video of their debut hit single “Why I Bother”, in frequent rotation on Much Music Television, it is safe to say that Tupelo Honey has hit yet another level of musical success. Maintaining what is now a very progressive stride, it won’t be long before additional radio stations nationwide begin playing Tupelo Honey’s music. This increasing radio play will hopefully only serve to augment the group’s success and over-all reach. As Tupelo Honey slowly takes the country by storm, it is seemingly only a matter of time before the group’s explosive music starts to penetrate the market of our neighbours to the south. One can only expect that this positive growth will in turn, convince the band to (sooner rather than later) return to the recording studio and produce a full-length album.

Ironically, in the past, the name Tupelo Honey has generally been associated with a sticky treat that originates from the Tupelo gum tree, as well as with Van Morrison’s 1971 album entitled “Tupelo Honey”. Now, however, for the first time ever, the name Tupelo Honey is synonymous with so much more. It is the name of an amazingly-talented group of ambitious Canadian guys whose rock music is spreading all across the country. This band is just now beginning to realise their full potential and assuredly within no time, these musicians will mature and morph into one powerful rock monster.  [ END ]