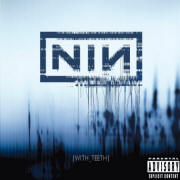 After what seems like an eternity, Trent Reznor’s Nine Inch Nails are back with the long awaited follow up to 1999’s The Fragile. As always when he embarks on writing and recording a new album, Reznor always makes sure to make the new album sound drastically different from the last album and With Teeth is no exception. Instead of the drum machines that listeners have become accustomed to, Reznor recruited the help of super drummer Dave Grohl to do all the album’s drumming. After thoroughly listening to the album several times, it becomes clear that the Grohl-Reznor combination succeeds gloriously as With Teeth is without a doubt one of the best albums of 2005.

The album begins with the slow starting “All the Love in the World,” a song that Reznor himself admits might throw listeners for a loop and turn them off of the album. The song is quite unlike anything Nine Inch Nails has ever done. Reznor repeats over and over again over a slow piano beat the line “why do you get all the love in the world?” and it is not until the song is nearly over that a hard drum beat and loud, distorted industrial guitars come into the song. The tune is a nice way to start the album, although I wouldn’t consider it one of the best songs. By track two “You Know What You Are?,” the listener finally gets a taste of Grohl’s drumming on the album. It only takes a few seconds until it becomes evident that Grohl’s mastery is at work on the song. This is another great song and one of the hardest and angriest songs on With Teeth. Grohl’s live drumming also drives the next song, “The Collector.” I wasn’t particularly impressed with this song, although it is decent. The album’s first single comes at track four, the hard driving, poppy sounding “The Hand That Feeds.” And while it has a very cool sounding, unconventional synthesizer solo, the song shows off Reznor’s new, more stripped down approach as the track is a typical three and a half minute rock song. The next two songs, “Love Is Not Enough” and “Everyday Is Exactly The Same,” contain classic Reznor lyrics of hopelessness and death and are both solid songs, even though I wouldn’t rate them among the best.

The best portion of With Teeth comes between track seven and track eleven. Track seven is the title track and the longest song on the disc. The song is one of my favorite off the album as it features more killer drumming from Grohl and a simple, yet effective and catchy chorus that will have you repeating the phrase “with teeth” all day. The disc’s second single “Only,” comes next, a song that may make the jaws drop of longtime Nine Inch Nails fans. The song is very catchy and unlike anything Reznor has ever done before. The song has such a pop feel to it for a Nine Inch Nails song that you might think that Reznor lifted the song from Gwen Stefani’s solo album. While many fans might feel nauseous at the sound of “Only,” it is definitely an awesome song and one of my favorites on the album. Track nine is the stripped down rocker “Getting Smaller,” a song that sounds a lot to me like something off of Velvet Revolver’s debut album. This is another great track and Velvet Revolver can only wish that they sounded this good. Next comes the very satisfying “Sunspots” followed by one of the finest tracks on the album, “The Line Begins To Blur.” As the song begins, it goes right into a viciously hard and aggressive industrial beat. Reznor’s verses sound like he is screaming them from the next room with the door locked and even though the song could have been a bit longer, it is still stellar. Track twelve “Beside You In Time” lulls you along quietly before picking up towards the end and it is another solid cut, although not one of my favorites. The album closer “Right Where It Belongs” will likely remind listeners of the emotional album finale “Hurt” from NIN’s 1994 masterpiece The Downward Spiral. The song ends the album perfectly as Reznor ponders over a quiet piano beat “what if everything around you, isn’t quite as it seems?” The song is very emotional and demonstrates well the true genius of Reznor.

Overall, With Teeth is an outstanding album and it proves without a doubt that Trent Reznor is a true musical genius. While not all of the songs are classics, the album does not contain one bad song. If you were a huge fan of The Fragile, you may not like this album because of Reznor’s drastically different direction, but Reznor has never been about maintaining the same sound on his albums. If you are open minded listener, willing to listen to something different from NIN, then you will probably love this album. Reznor has done it again on With Teeth and one can only hope that we will not have to wait another five and a half years for the next NIN album.  [ END ]