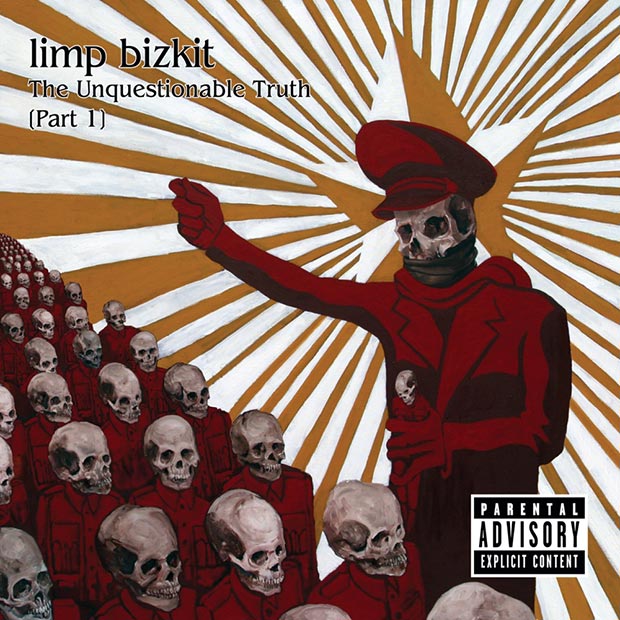 The L.I.M.P. is back, and without intending to throw down a cliché, they are better than ever! Recent news about the group has indicated that they spent quite some time in Prague, the capital city of the Czech Republic, recording their newest material. Fred Durst, Bizkit’s frontman, stated that the city’s dark and historic atmosphere has greatly contributed to the writing, of what he considers his best material to date. Also, with the return of Wes Borland, the band’s lead guitarist, Limp Bizkit’s original lineup is once again intact. Whatever theses guys did in Prague (and we know that there was definitely a lot of the 144 proof green fairy involved), it has paid off, for this short seven track disc packs a serious punch.

The album boasts a more mature, more political, and more powerful Limp Bizkit sound. Whatever “dark” things the group got up to in Prague, have certainly superimposed themselves into the new material. The disc starts off impressively with a wild track called “The Propaganda.” The band has somewhat stayed true to its roots, however each song posses a few new characteristics. For example, this first song, although similar to their previous work, has a much harder chorus, not to mention extremely socio-politically conscious lyrics. For the most part, unlike their previous stop-n-go hip-hop feel, the songs are longer and possess a more consistent flow. “The Truth” is second and, after some tripped out guitar effects, starts off with a madly provocative running bass line. The song’s buildup is impeccable and only helps to make the riff-roaring climax even better. Over-all the song is riotously loud and by making use of more complex Tom Morello-esque guitar verses, Wes Borland has aided in laying down a sick track. Incidentally, some of Durst’s vocals strangely sound similar to those of Zack de la Rocha.

“It could be the absinthe talking…” is exactly how the third track begins. These very words could not have rung any truer, for as with the masterpieces of the ‘Absinthe-minded’ artist Van Gogh, this song, “The Priest”, is seriously skewed (in a good way obviously). Just as with the previous two tracks, this one blows the speakers out during the chorus, however it also boasts an uncharacteristically mellower verse. Fourthly is “The Key”, a 1:24 long hip-hop filler song. Despite its apparent uselessness, the song isn’t bad and does aid in offering a minor pause to the group’s blaringly dynamite songs. Following is another earsplitting tune entitled, “The Channel”. Although this song is tamer than the first half of the album, it is made up for with Durst’s aggressively political vocals. This song is certainly a prime example of how Limp’s sound has undergone some radical alterations and is slowly beginning to evolve.

Of all of the songs on the CD, the sixth song “The Story” seems to be the most like their previous work. The track does have a sweet bounce, thanks in part to an extremely catchy, slightly off-tempo, tremolo guitar riff. The chorus is good and is especially funny when Durst drops the line, “…it’s an E True Hollywood story”, blatantly knocking America’s star-obsessed society. The final track of this short nevertheless sweet disc is called “The Surrender”. Here the album does a 180 degree turn and completely diverts from the angry, strident sound which has come to overtake the entire album. Using some odd and mechanical samples, the track holds a certain Nine Inch Nail-like quality. The song is anything but a space filler, but is by no means anything super-special. It does serve, however, as a sort of auditory over-load detoxifier, allowing the listener to purge any left-over feelings of insanity or ire dwindling from the previous songs.

Overall Limp’s new sound is ferocious. The entire album has an underlying devious, dark, and eerie feel, all of which we thank the “Magic City Prague” for helping with. The fact that the album is labeled “Part 1”, as well as its abrupt and teasing length is undoubtedly indicative that there will soon be another to follow. Knowing now how sick this album turned out, the anticipation levels for the second part are already beginning to mount!  [ END ]