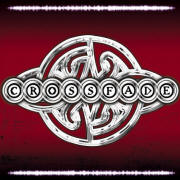 It took a whole lot of patience and determination, but North Carolinian band Crossfade has persevered and now their debut self-titled album is finally receiving the recognition that it merits. Even though the band had already self-recorded this disc prior to their contractual signing with Columbia Records in early 2003, it remained unreleased until April of 2004. In spite of the bands preparedness, and due in part to a merger and various corporate shenanigans, for approximately sixteen months, this awesome record simply collected dust. Fortunately for the band (and the fans), the disc is now readily available in stores everywhere. By mixing blaring hard riffs, powerfully melodic singing, and a slew of varied ‘emotional rock’ elements, the group has managed to create a unique, expressively-charged, hard rock sound that is sure to be ubiquitously respected.

The disc starts off quickly and frivolously with one of the band’s heaviest (and best) tracks, “Starless”. Much like a starless night this track is simultaneously dark, peaceful, and beautiful. It is a perfect example of Crossfade’s wonderful mix of musical rudiments. The song’s introduction (as well as parts of the chorus) wails like a violent Fear Factory track while the rest of the song sounds more like it was recorded by Canadian ‘emotional rockers’ Theory of a Deadman. “Cold”, the next track, is a sick tune which boasts amazing vocal harmony, smooth solos, and a rich and emotional sound akin to that of Nickelback. In the third spot is another melodic tune entitled “So Far Away”. The song offers an underlying tone of depression, but with approximately a minute to go, anger sets in and the track explodes with both screaming lyrics and guitars.

The fourth song, “Colors”, is highly catchy and a great demonstration of the group’s capability to simultaneously mix several different vocal harmonies all the while transitioning between hard and soft guitar riffs. After this we have “Death Trend Setta”, a funky track which exemplifies the group’s harder side. The verse has a choppy and somewhat erratic feel to it which is nothing less than beguiling. As the name might indicate, this song definitely has a slight rap/rock feel to it. Subsequently is, “The Deep End”, a beautiful tune which is in some ways reminiscent of Linkin Park’s more melodic material. It offers emotionally-charged, disheartening lyrics which are sure to be a favourite amongst angst-ridden teens everywhere. As the song ends, it transitions wonderfully into “No Giving Up”. This tune is yet again similar sounding to Linkin Park, nevertheless, is unique enough so as to not be mistaken for their work.

“Dead Skin” is the eighth song, and ironically Crossfade temporarily sheds its more aggressive rock sound revealing a mellow and melodic tune which would be ideal for a next single. Here the band shows that even without dramatic distortion, they can still produce a thick and powerful sound. Next up is “Disco”. Overall the song is good, despite the partially cheesy lyrics which are sung during the poppy verse. Thankfully, the song ends far better than it begins. The final (and by far the softest) song on this ten-track disc is called “The Unknown”. It includes some quirky, organ-sounding keyboard samples and although it will never be a hit, it is a nice way for the album to end.

Crossfade is only now beginning to receive the large-scale recognition that they will eventually achieve. They are all talented musicians, each of whom brings to the band a unique quality whose resulting amalgamated sound is wild. Their debut disc is fantastic and if you are at all into bands such as Seemless, Theory of a Deadman, or Three Doors Down, then be sure to check out Crossfade.  [ END ]