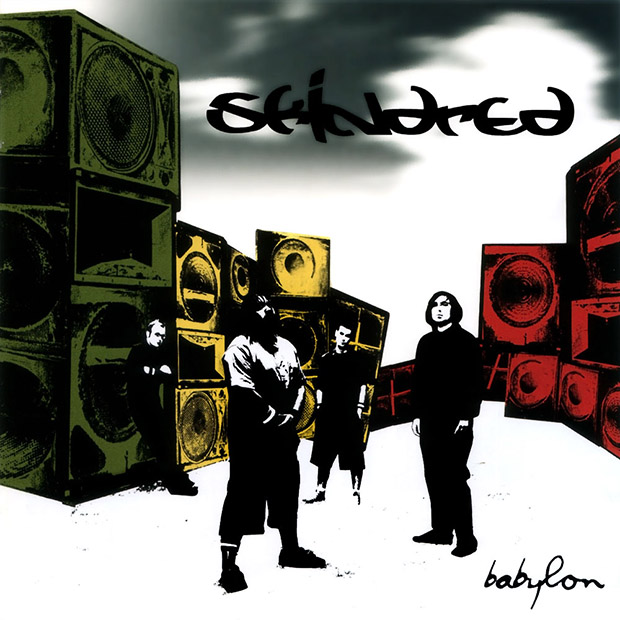 You might have thought of the idea once in the past, but you have never actually heard it come together. What am I talking about, you ask? Well, what would it sound like if someone where to combine metal, punk, and reggae? The answer, in one word: Skindred. Skindred is a hot new band (native to South Wales, U.K.), whose music is taking the world by storm. The band’s sound is so unique and fresh that it could be the best and most innovative new rock music sound (and group) since Nirvana. Critics everywhere are raving about this group and rightly so; their sound is SICK. “We firmly believe this band could change the face of rock music. Once in a very, very long while a band like Skindred comes along with a record this imaginative, fresh and cutting edge” said Jason Bieler of US management company, Bieler Group. The word is out and the verdict is in; Skindred kicks ass and will leave people gaping in awe.

The band’s debut album “Babylon” hit record stores in August of 2004, and has been picking up steam ever since. Here’s a look at what the disc is has to offer. After a brief twenty-nine second intro (and there are a few of these throughout the disc), the album kicks off with an incredibly attractive ditty called “Nobody”. This song is a definitive example of Skindred’s RAGA METAL sound. It includes extremely chill yet grooving beats that one would expect with reggae; however, the chorus blasts the dreads of your head with crazy roaring metal riffs. Wicked song! Roughly four minutes later, after the adrenaline has started to rush, the band cranks out “Pressure”. This track certainly possesses more of a 311 quality to it, but maintains originality. Although it is not nearly as heavy as the previous track, it still rocks hard. Even if it is not as good as the first two tracks, the third song, “Start First” is also excellent. Following the same pattern of soft choruses and hard verses, the song is another phenomenal reggae/metal mix.

After a mini interlude, a short but totally sweet song number seven starts up. “Selector” is much less metalish, but nonetheless, is a wickedly fun song – a great tune for the pending good weather. Not to stay too soft for too long, the next song “Bruises” jumps right back into a crazy neck snapping head banging jam. “Bruises”, although slightly short, is an awesomely energetic track. Following, in the ninth spot, is a sweet summer sounding, happy-go-lucky, tune called “We Want”, that is somewhat reminiscent of Sprung Monkey. The subsequent interlude, is the first real appearance of the drum and bass aspects included in Skindred’s music. It leads nicely into the eleventh song, “Set it Off”. It is incredible that as the album progresses, the songs just keep improving. “Set it Off” is exceptionally musically complex; a very skilled tune. Flowing is “Firing the Love”. A bit of a darker sound here, not to mention a hint of Arabic flavours which are most noticeable in the vocals. What can be said? But to no surprise, this track (which includes a Tom Morello-esque guitar solo) is sick too!

“Tears”, the twelfth track, is the first real example of punk influence in Skindred’s music. It is much different from the first eleven songs (seeing that it is rooted in punk and not metal), but nevertheless fits in well. Lucky number thirteen is given to “World Domination”. Although this is one of the few weaker (but still respectable) songs on the disc, the song title is seemingly a premonition of things to come, for the band will undoubtedly (and deservingly) achieve worldwide recognition. “The Fear”, is next and it is way soft. The track is half decent, but seems just a tad out of place. After the last interlude two songs remain. First off is the title-track “Babylon”, which is certainly another rockin’ song. Hip-hop influences are immediately present as the lead singer busts out some sick rhymes just before the RAGA METAL sound comes roaring back. It was definitely a relief to find this hidden gem at the end of the disc (especially after the lats song). The final tune, “The Beginning of Sorrows”, is no less than icing on the cake. A nice track; it is moderately heavy and slower than most of the previous songs – ironically, a smooth way to end the CD.

This group shows mad promise! Skindred is a sick group with an equally remarkable sound. It is so relieving to for a change, hear some genuinely unique rock music. Skindred has only produced one album so far, but there will indubitably be much more music to come from this band. If you do only one thing this week; listen to this CD!  [ END ]