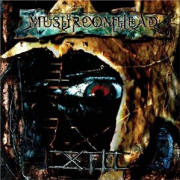 Ah the atomic bomb! Not only was it a triumph of man over the scientific and chemical worlds of destruction, but it has also yielded many subsequent functions. More specifically; the name of one hell of an intense metal band. Mushroomhead’s most recent album entitled “XIII” was released in October of 2003. The alleged story behind the name of this disc comes from the bad luck that the band has typically possessed in its ten year lifespan. For example, recently vocal front man, JMANN, left the band just prior to a scheduled tour with Insane Clown Posse. Hopefully this review, combined with some regularly scheduled humanistic curiosity, will help to increase this remarkable group’s recognition.

It is often said that the first song on an album is one of the most important. Why this is said I had no idea, but one can only assume that theoretically if a first track is bad then there is a chance people won’t listen to the rest of the CD. Well in this case, Mushroomhead need not worry (of course, they already knew that). “Kill Tomorrow” is such a good song one ought to instantly get spinal shivers (the good kind to clarify). It is quite possible that this track is the best on the disc, but we don’t want to impose our opinion so listen to it stat. With bone crushing guitar riffs and a mix of screamin’ and speakin’ lyrics, one can’t go wrong – a totally appealing tune. The next track, “Sun Doesn’t Rise”, follows suit. The song offers a chorus with a funkier lyrical sound and a more harmonious verse. Although still heavy, it is somewhat of a calmer and more user-friendly sound for the group. After a brief piano intro (okay it’s probably keyboard), “Mother Machine Gun” dives headfirst into a slow, dark, and mesmeric crawl. Interestingly, the sound that emanates from the aggressively played axes, abstractly mimics a machine gun. Some other sick samples help this song to sound great. “Nowhere to Go”, comes in at the 4-spot and illustrates Mushroomhead’s ability to tone down the aggressive meter – yes this means that this song is “softer”. Using strings other than that of an electric guitar (although they use one) the song is very aurally pungent.

There is most certainly no slowing down or softening up for these guys though, as they come right back with another wild tune. “Becoming Cold” should be “Becoming Hot” ‘cause I know the tubes in those amplifiers are screaming when they play this song – sick tune. “One More Day” boats a piano-filled intro, but unlike the previous ‘piano-song’, they remain throughout the tune. Female vocals and other orchestral samples make this track relatively chill in comparison to the others. Like thunder overhead, double bass pedals sound the nasty drum beat to, “The Dream is Over”. Instantly snapping anyone out of their daily mind-numbness, this tune is a staple of the insane sound that Mushroomhead has come to be known for. If this doesn’t make you semi hyper-active nothing will. Of course, the insanity continues with the next track, “The War Inside”. This song hits with the same hurricane force as its predecessor, yet proves to be more melodious – definitely a wining combination.

“Almost Gone” starts of with the ignition and revving of what seems to be a V-12 engine. Not unlike the car, this song boasts mad muscle too. But what else would one expect from a band with Mushroomhead’s reputation? With its simple and poppin’ guitar riff, this track is awfully appealing – one of the catchier ones on the disc. “Eternal” for 200 please. For how long will you be deaf after hearing this song only once? If you thought that the previous songs were hard, think again. The intensity of this song is so insanely sweet that it is impossible not to want to go a few rounds in a boxing ring. The verse is sick and the chorus is even better. Being at the end of the disc, “Our Own Way”, helps (at least a little) to calm you down after the barrage of heavy tunes. This is a great song and is yet another example of the true musical talent that the band possesses. A dozen songs later we have “Destroy the World Around Me”. As per many metal bands, some songs can be quite lengthy, and these last two are no exceptions as they are 8:20 and 9:32 in length respectively. Can songs this long really be good? Yup! Although the first of the two is better.

Mushroomhead is way more than a bunch of creepy dudes in scary costumes. They are in fact, awesome musicians who have compiled an equally impressive band. “XIII” is their latest release and it is a whopper. Check it out for sure. If you like really heavy music I don’t think you’ll be disappointed (although maybe a little scared).  [ END ]