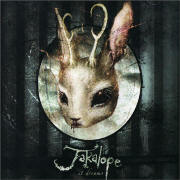 The crowd was on their feet that night at the Mod club in metropolitan Toronto. They were waiting for the pink-haired goddess of this electro-industrial pop rock mystery that so patiently crawled into music stores to appear on stage. Dave Ogilvie’s dream team was being tested. With an album to show and talent to share, Jakalope is one of the most interesting bands you’ll see this year.

“It Dreams” is a popish album with its dark moments. Although distanced from any other industrial or pop music, Jakalope brings this fresh sound to an audience that has not quite grasped the full meaning of Ogilvie’s newborn. Throughout the album, Katie B’s songwriting becomes evident in the many problems pointed towards members of the opposite sex. The ex Mandy Moore backup singer delivers “Feel it”, the hit single with the strange alien-in-jar themed video, with unprecedented talent, without forgetting “Pretty life” , and the lesser known “Tell Me Why”, which also carries its load of lyrical relationship problems. Although, unlike any other Ogilvie project, this isn’t Antichrist Superstar or March Of The Pigs.

Jakalope, Dave “Rave” Ogilvie’s project since spring 2003, is the brainchild that spawned from working with bands such as Nine Inch Nails, N.E.R.D, David Bowie, Mötley Crüe, Marilyn Manson, and the Skinny Puppy. This world-renowned produced/mixer from Vancouver learned a lesson or two before stepping into the big bad world of creative freedom. Created from an amalgam of artists, 36 to be precise, Jakalope stands out from the crowd. The twenty-two year old lead singer from Calgary, Katie Beiver, was found managing Bryan Adam’s Warehouse Studio, and was hired upon singing only two songs. Don Harrison, Don Binns and Don Short or “the three Dons” were originally part of the band “Sons of Freedom”, the eccentric and artful team of Canadian hard rock that marked music ahead of its time, until its downfall in 1993. This all-star team carries the experience, but the album lacks chemistry.

The Jakalope debut album has its ups and downs, but remains a tremendous effort towards a new style, never seen before. With songs such as “Creeper (Coming for you)”, “Come On”, “Light after Night” and “Screecher”, Ogilvie’s mixing genius is inventive, but does not save the repetitive contents of the songs. However, one cannot ignore the beauty in “Nothing Nowhere” which flows beautifully with the help of careful mixing. While “Don’t Cry” retains a soft industrial flavor with well-chosen strings, “Go Away” features “The Three Dons” in all their wonder. “House of Ill Trepidation”, the last track of the album leaves us with what seems to be an instrumental piece, but continues halfway with Katie B’s irresistible voice, and can only leave space for yet another album. But the most successful track of the album would ironically be Dave Ogilvie’s only vocals on the album appearing under “Bad Dream”, which may carry Jakalope’s true essence as a mysterious band, under the guise of darker lyrics.

Oh, “It Dreams” alright. It dreams of perhaps less Mandy Moore and more Trent Reznor, but it remains Ogilvie’s project, and whatever comes from the mind of this tormented genius, could be more than surprising.

But then there’s Jackalope and there’s Jakalope. Mythical creature or mythical band?  [ END ]